Catching the Light: The Entwined History of Light and Mind (Paperback) 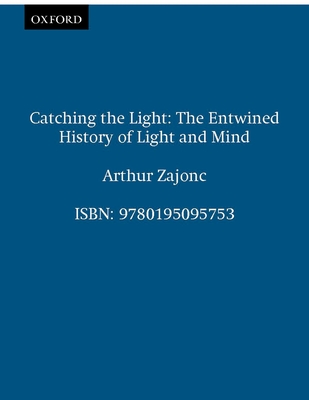 In 1910, the surgeons Moreau and LePrince wrote about their successful operation on an eight-year-old boy who had been blind since birth because of cataracts. When the boy's eyes were healed they removed the bandages and, waving a hand in front of the child's physically perfect eyes, asked him what he saw. "I don't know," was his only reply. What he saw was only a varying brightness in front of him. However, when allowed to touch the hand as it began to move, he cried out in a voice of triumph, "It's moving " He could feel it move, but he still needed laboriously to learn to see it move. Light and eyes were not enough to grant him sight. How, then, do we see? What's the difference between seeing and perception? What is light?
From ancient times to the present, from philosophers to quantum physicists, nothing has so perplexed, so fascinated, so captivated the mind as the elusive definition of light. In Catching the Light, Arthur Zajonc takes us on an epic journey into history, tracing how humans have endeavored to understand the phenomenon of light. Blending mythology, religion, science, literature, and painting, Zajonc reveals in poetic detail the human struggle to identify the vital connection between the outer light of nature and the inner light of the human spirit. He explains the curiousness of the Greeks' blue and green "color blindness" Odysseus gazing longingly at the "wine-dark sea"; the use of chloros (green) as the color of honey in Homer's Odessey; and Euripides' use of the color green to describe the hue of tears and blood. He demonstrates the complexity of perception through the work of Paul C zanne--the artist standing on the bank of a river, painting the same scene over and over again,
the motifs multiplying before his eyes. And Zajonc goes on to show how our quest for an understanding of light, as well as the conclusions we draw, reveals as much about the nature of our own psyche as it does about the nature of light itself. For the ancient Egyptians the nature of light was clear--it simply was the gaze of God. In the hands of the ancient Greeks, light had become the luminous inner fire whose ethereal effluence brought sight. In our contemporary world of modern quantum physics, science plays the greatest part in our theories of light's origin--from scientific perspectives such as Sir Isaac Newton's "corpuscular theory of light" and Michael Faraday's "lines of force" to such revolutionary ideas as Max Planck's "discrete motion of a pendulum" (the basis of quantum mechanics), Albert Einstein's "particles of light" and "theory of relativity," and Niels Bohr's "quantum jumps." Yet the metaphysical aspects of the scientific search, Zajonc shows, still loom large. For the
physicist Richard Feynman, a quantum particle travels all paths, eventually distilling to one path whose action is least--the most beautiful path of all. Whatever light is, here is where we will find it.
With rare clarity and unmatched lyricism, Zajonc illuminates the profound implications of the relationships between the multifaceted strands of human experience and scientific endeavor. A fascinating search into our deepest scientific mystery, Catching the Light is a brilliant synthesis that will both entertain and inform.

Arthur Zajonc is Professor of Physics at Amherst College and a fellow of both the Lindisfarne Association and the Fetzer Institute.