Genomic Politics: How the Revolution in Genomic Science Is Shaping American Society (Hardcover) 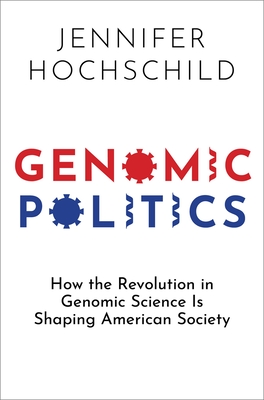 A groundbreaking analysis of how the genomic revolution is transforming American society and creating new social divisions-some along racial lines-that promise to fundamentally shape American politics for years to come. The emergence of genomic science in the last quarter century has revolutionized medicine, the justice system, and our understanding of who we are. We use genomics to determine guilt and exonerate the falsely convicted; devise new medicines; test embryos; and discover our ethnic and national roots.
One might think that, given these advances, most would favor the availability of genomic tools. Yet as Jennifer Hochschild explains in Genomic Politics, the uses of genomic science are both politically charged and hotly contested. After all, genomics might result in bioterrorism, a demand for
designer babies, or a revival of racial biology. Political divisions around genomics do not follow the usual left-right ideological divides that dominate most of American politics. Through four controversial innovations resulting from genomic science--medicines for heart disease approved for use by only African-Americans, on the grounds of genetic
distinctiveness; use of DNA evidence in the criminal justice system; the search for one's roots through genetic ancestry; and the use of genetic tests in prenatal exams--Hochschild reveals how the phenomenon is polarizing America in novel ways. Advocates of genomic science argue that these
applications will make life better, while opponents point out the potential for misuse--from racial profiling to selecting out fetuses that gene tests show to have conditions like Down syndrome. Hochschild's central message is that the divide hinges on answers to two questions: How significant are
genetic factors in explaining human traits and behaviors? And what is the right balance between risk acceptance and risk avoidance for a society grappling with innovations arising from genomic science? Experts differ among themselves about who should make decisions about governing genomics' uses,
and Americans as a whole trust almost no one to do so. A deeply researched and original analysis of the politics surrounding one of the signal issues of our times, this is essential reading for anyone interested in how the genetics revolution is shaping society.

Jennifer Hochschild is Henry LaBarre Jayne Professor of Government as well as African and African American Studies at Harvard University and a former President of the American Political Science Association. Hochschild is the author or co-author of numerous books, including recently, Do Facts Matter?(co-authored with Katherine Levine Einstein), Creating a New Racial Order (co-authored with Vesla Weaver and Traci Burch), and Bringing Outsiders In (co-edited with John Mollenkopf). She is also the author of The American Dream and the Public Schools (co-authored with Nathan Scovronick), and otherbooks.