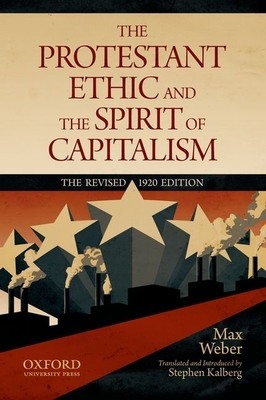 For more than 100 years, Max Weber's The Protestant Ethic and the Spirit of Capitalism has set the parameters for the debate over the origins of modern capitalism. Now more timely and thought provoking than ever, this esteemed classic of twentieth-century social science examines the deep
cultural frame of mind that existed at the birth of modern capitalism and to this day influences attitudes toward work in northern America and Western Europe. In this volume, Stephen Kalberg revises his internationally acclaimed translation--using shorter sentences and more lucid language--to make the work even more accessible to students and other readers. Capturing the essence of Weber's style as well as the subtlety of his descriptions and causal
arguments, this is the only translation of the revised 1920 edition of The Protestant Ethic and the Spirit of Capitalism published since 1930. To draw readers into the material, this engaging volume includes extensive introductions by the editor, a chronology of Weber's life, a glossary, and numerous clarifying endnotes. Detailed commentaries discuss the controversies Weber addressed, explain his complex causal argument by reference to the
general contours of his sociology, summarize the history of the Protestant Ethic debate, and examine the significance of the Protestant Sects essays. Ideal for courses in sociology, anthropology, political science, history, international relations, economics, and cultural studies, The Protestant Ethic and the Spirit of Capitalism is an essential resource for anyone seeking to understand the origins and endurance of the modern West.

Stephen Kalberg is Associate Professor of Sociology at Boston University and an affiliate of the Minda de Gunzburg Center for European Studies at Harvard University.