The Kingdom of Matthias: A Story of Sex and Salvation in 19th-Century America (Paperback) 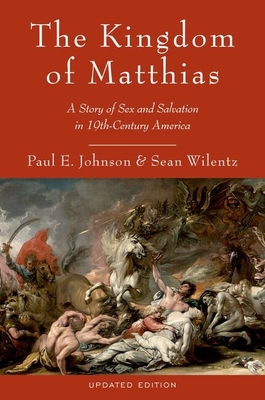 Paul Johnson and Sean Wilentz brilliantly recapture the forgotten story of Matthias the Prophet, imbuing their richly researched account with the dramatic force of a novel. In the hands of Johnson and Wilentz, the strange tale of Matthias opens a fascinating window into the turbulent movements of the religious revival known as the Second Great Awakening--movements that swept up great numbers of evangelical Americans and gave rise to new sects like the Mormons. Into this teeming environment walked a down-and-out carpenter named Robert Matthews, who announced himself as Matthias, prophet of the God of the Jews. His hypnotic personality drew in a cast of unforgettable characters--the meekly devout businessman Elijah Pierson, who once tried to raise his late wife from the dead; the young attractive Christian couple, Benjamin Folger and his wife Ann (who seduced the woman-hating Prophet); and the shrewd ex-slave Isabella Van Wagenen, regarded by some as the most wicked of the wicked. None was more colorful than the Prophet himself, a bearded, thundering tyrant who gathered his followers into an absolutist household, using their money to buy an elaborate, eccentric wardrobe, and reordering their marital relations. By the time the tensions within the kingdom exploded into a clash with the law, Matthias had become a national scandal.

Paul E. Johnson is Distinguished Professor of History Emeritus at the University of South Carolina and is the author of numerous books, including Sam Patch, the Famous Jumper and A Shopkeeper's Millennium: Society and Revivals in Rochester, New York, 1815-1837. Sean Wilentz is George Henry Davis 1886 Professor of American History, Princeton University. He is the author of Chants Democratic: New York City and the Rise of the American Working Class, 1788-1950 and The Rise of Democracy: Jefferson to Lincoln, among other titles.