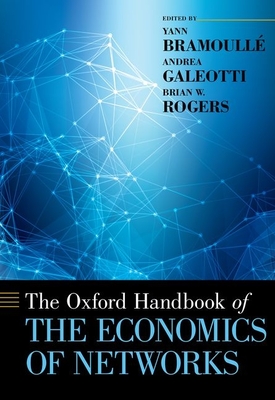 The Oxford Handbook of the Economics of Networks represents the frontier of research into how and why networks they form, how they influence behavior, how they help govern outcomes in an interactive world, and how they shape collective decision making, opinion formation, and diffusion dynamics. From a methodological perspective, the contributors to this volume devote attention to theory, field experiments, laboratory experiments, and econometrics. Theoretical work in network formation, games played on networks, repeated games, and the interaction between linking and behavior is synthesized. A number of chapters are devoted to studying social process mediated by networks. Topics here include opinion formation, diffusion of information and disease, and learning. There are also chapters devoted to financial contagion and systemic risk, motivated in part by the recent financial crises. Another section discusses communities, with applications including social trust, favor exchange, and social collateral; the importance of communities for migration patterns; and the role that networks and communities play in the labor market. A prominent role of networks, from an economic perspective, is that they mediate trade. Several chapters cover bilateral trade in networks, strategic intermediation, and the role of networks in international trade. Contributions discuss as well the role of networks for organizations. On the one hand, one chapter discusses the role of networks for the performance of organizations, while two other chapters discuss managing networks of consumers and pricing in the presence of network-based spillovers. Finally, the authors discuss the internet as a network with attention to the issue of net neutrality.