The Oldest Living Things in the World (Hardcover) 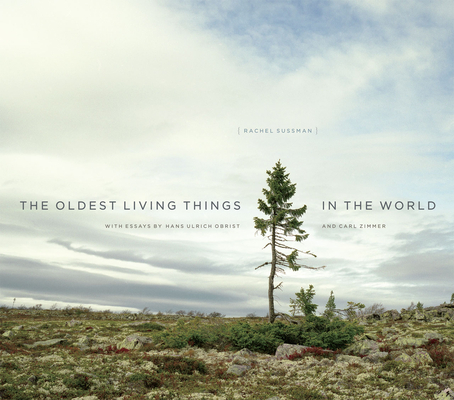 The Oldest Living Things in the World is an epic journey through time and space. Over the past decade, artist Rachel Sussman has researched, worked with biologists, and traveled the world to photograph continuously living organisms that are 2,000 years old and older. Spanning from Antarctica to Greenland, the Mojave Desert to the Australian Outback, the result is a stunning and unique visual collection of ancient organisms unlike anything that has been created in the arts or sciences before, insightfully and accessibly narrated by Sussman along the way.

Her work is both timeless and timely, and spans disciplines, continents, and millennia. It is underscored by an innate environmentalism and driven by Sussman’s relentless curiosity. She begins at “year zero,” and looks back from there, photographing the past in the present.  These ancient individuals live on every continent and range from Greenlandic lichens that grow only one centimeter a century, to unique desert shrubs in Africa and South America, a predatory fungus in Oregon, Caribbean brain coral, to an 80,000-year-old colony of aspen in Utah. Sussman journeyed to Antarctica to photograph 5,500-year-old moss; Australia for stromatolites, primeval organisms tied to the oxygenation of the planet and the beginnings of life on Earth; and to Tasmania to capture a 43,600-year-old self-propagating shrub that’s the last individual of its kind. Her portraits reveal the living history of our planet—and what we stand to lose in the future. These ancient survivors have weathered millennia in some of the world’s most extreme environments, yet climate change and human encroachment have put many of them in danger. Two of her subjects have already met with untimely deaths by human hands.

Alongside the photographs, Sussman relays fascinating – and sometimes harrowing – tales of her global adventures tracking down her subjects and shares insights from the scientists who research them. The oldest living things in the world are a record and celebration of the past, a call to action in the present, and a barometer of our future.

Rachel Sussman is a contemporary artist based in Brooklyn. Her photographs and writing have been featured in such places as the New York Times, Wall Street Journal, Guardian, and NPR’s Picture Show. A trained member of the Climate Reality Leadership Corps, Sussman has spoken on her work at TED and the Long Now Foundation. Her work has been exhibited in museums and galleries in the United States and Europe.

Carl Zimmer is a columnist for the New York Times, where he has contributed articles since 2004. His writing has earned a number of awards, including the Stephen Jay Gould Prize, awarded by the Society for the Study of Evolution. His latest book is Life’s Edge: The Search for What It Means to Be Alive.  His 2018 book, She Has Her Mother’s Laugh: The Powers, Perversions, and Potential of Heredity, won the 2019 National Academies Communication Award and was named the best science book of 2018 by the Guardian. He is professor adjunct of biophysics and biochemistry and a lecturer in English at Yale University. He lives in Guilford, CT.

“As a kind of time-traveling expeditionist — a chrononaut? —Sussman lets us drink from primeval wells. One of the great satisfactions of her book is that it allows us to peer at the almost eternal even as we’re mired in a culture quick to praise the new and ephemeral.”
— New York Times

“The Oldest Living Things in the World serves us the humbling profundity and pathos of things that live almost forever. We see our abstract selves and feel the terrible bludgeon of that which we cannot have and are fated only to behold. Rachel Sussman brings you to the place where science, beauty, and eternity meet.”
— Jerry Saltz, New York Magazine

“The Oldest Living Things in the World adds in dramatic manner a fascinating new perspective—literally, dinosaurs—of the living world around us.”
— Edward O. Wilson, Harvard University

“Longevity means continuity. Long-lived people connect generations for us. Really long-lived organisms, like the ones Sussman has magnificently collected photographically, connect millennia. They put all of human history in living context. And as Sussman shows, they are everywhere on Earth. This book embodies the Long Now and the Big Here.”
— Stewart Brand, cofounder, The Long Now Foundation

“Something astounding happens when Rachel Sussman photographs the most ancient organisms to be found across our planet. A fraction of a second of time in her photographic exposures animates forms that have evolved across nature's deep time to create a profound experience of being alive. Sussman's ten-year investigation of the symbols of the earth's ecology is rigorous and exploratory, realized with such generosity to the reader and her ambitions make an impossibly vast subject both felt and understood.”
— Charlotte Cotton, author of The Photograph as Contemporary Art

“I am in awe—awe staring at my planet's old sages, who know the way things were, will be, and should be—awe when I appreciate Rachel Sussman's epic quest to round them all up and her daring in stealing their soul with her photographs.”
— Paola Antonelli, senior curator, Museum of Modern Art

“There’s a sense of wonder imbued in these photographs of organisms that seem to be a physical record of time, but there’s also a call to action. Many of these subjects of Sussman’s portraits are under threat from habitat loss or climate change or simple human idiocy.”
— Time

“Beautiful and powerful work at the intersection of fine art, science, and philosophy, spanning seven continents and exploring issues of deep time, permanence and impermanence, and the interconnectedness of life. With an artist’s gift for ‘aesthetic force’ and a scientist’s rigorous respect for truth, Sussman straddles a multitude of worlds as she travels across space and time to unearth Earth’s greatest stories of resilience, stories of tragedy and triumph, past and future, but above all stories that humble our human lives.”
— Brain Pickings

“The series, and now book, is part art, part science, and part travelogue, but the whole is greater than the sum of its parts. Because whether you look at these as documentary photography or scientific snapshots of millennia-old species that are now being threatened by the looming specter of climate change, there’s something in this book for everyone.”
— PetaPixel

“A gorgeous book of stunning portraits which almost seem to capture the wise, wizened personalities of these scraggy pines, rippling sea grasses, and otherworldly mosses. Accompanying the photo are Sussman’s essays, which serve as both a scientific explainer and a captivating travelogue, transporting the reader to often freakishly remote locations on all seven continents. The book and its subjects are at once inspiring and terrifying—a testament to the resiliency of nature, of course, but also a reminder of its fragility.”
— Gizmodo

“Photographer Sussman has spent the past decade looking for the oldest things alive. Her search has led her to every continent, to specimens such as a 2,400-year-old fungus in Oregon to an ancient shrub in Tasmania (age: 43,600). She documents 30 of those organisms in her new book, The Oldest Living Things in the World. To find them, she enlisted the help of biologists and explorers—and even collaborated with the Polar Geospatial Center to get arctic satellite maps to reach a rare moss.”
— Wall Street Journal

“The Oldest Living Things in the World by contemporary artist Rachel Sussman features photographs of 30 of the oldest continuously living organisms in the world. They're a dry, scraggly lot, like 5,500-year-old, weather-worn Antarctic moss (first picture, below), and a 2,000-year-old, brittle-looking pafuri baobab tree in South Africa (second picture). Like the very oldest human beings, tucked away in nursing homes, the oldest plants tend to live in out of the way places, stolid in the desert or reproducing slowly beneath the permafrost. But unlike human beings, who fade away, these organisms quietly thrive, diligently repairing their aged molecules and stonewalling generations of pathogens. Most of the time these old things are an afterthought, but collected together, they begin to appear as the main event on earth.”
— Boston Globe

“We need more artists, musicians, dancers, and poets to give humanistic expression to the pursuit of environmental knowledge. I wish major research institutions supported artist-in-residence programs alongside labs. Sussman believes that ‘[t]he best art and science projects enhance and extend each other, bringing something new to both; they are not about simply making the research pretty, or making artworks using novel scientific tools.’ By this measure, The Oldest Living Things in theWorld is a work for the ages.”
— Science

“Anyone who sees Sussman’s images will be struck by their beauty, but the photos also have the power to make one ponder our fate, and the planet’s.”
— San Francisco Chronicle

“At a time when science is increasingly specialized, her artist’s vision transcends the divides between disciplines, and she highlights the importance of analyzing longevity across species as a way of understanding our world.”
— Boston Globe

“The photos are beautiful, and even more so when you learn how ancient each living thing is. Her youngest subjects are 2,000 years old (such as brain coral she found in Tobago, and a strange exotic plant called welwitschia spotted in Namibia), and these are mere toddlers compared to their elders, like the 80,000-year-old aspen trees from Utah (pictured above) and the 400,000-600,000 year-old continually living Siberian bacteria! A photography book filled only with these incredible miracles of nature would have certainly made for a gem to be displayed. But Sussman surprised me with what most coffee table books don’t do – she told an engaging story, filled with humor, intrigue, and fascinating science, based on her experience over the last 10 years researching, traveling and photographing this book. If Oldest Living Things contained no photos, her story would still easily stand on its own as a captivating memoir … or an engaging science textbook … or both, actually.”
— Boing Boing

“The images, collected in The Oldest Living Things in the World, are vast in size and accomplishment, the colours startling. Readers are left with a sense of wonder at these miracles and at Sussman’s retelling of her journey.”
— New Statesman

“Sussman’s ten-year journey going back in time thousands of years through photographs offers a unique perspective that will inspire current and future biologists. Recommended.”
— Choice

“This unique, ambitious book sets out to review the interdisciplinary and fragmented work of those who have discovered by accident or purse perseverance an incredibly ancient living thing. . . . Sussman’s quirky catalog of travel and photo-documentation is both artistically and scientifically one of a kind.”
— American Scientist