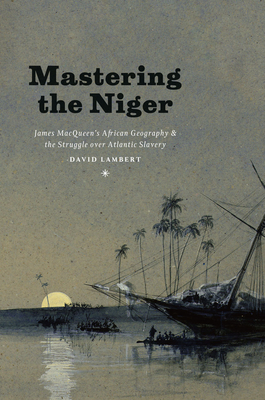 In Mastering the Niger, David Lambert recalls Scotsman James MacQueen (1778–1870) and his publication of A New Map of Africa in 1841 to show that Atlantic slavery—as a practice of subjugation, a source of wealth, and a focus of political struggle—was entangled with the production, circulation, and reception of geographical knowledge. The British empire banned the slave trade in 1807 and abolished slavery itself in 1833, creating a need for a new British imperial economy. Without ever setting foot on the continent, MacQueen took on the task of solving the “Niger problem,” that is, to successfully map the course of the river and its tributaries, and thus breathe life into his scheme for the exploration, colonization, and commercial exploitation of West Africa.           Lambert illustrates how MacQueen’s geographical research began, four decades before the publication of the New Map, when he was managing a sugar estate on the West Indian colony of Grenada. There MacQueen encountered slaves with firsthand knowledge of West Africa, whose accounts would form the basis of his geographical claims. Lambert examines the inspirations and foundations for MacQueen’s geographical theory as well as its reception, arguing that Atlantic slavery and ideas for alternatives to it helped produce geographical knowledge, while geographical discourse informed the struggle over slavery.

David Lambert is a reader of Caribbean history in the Department of History at the University of Warwick, UK, and director of the Yesu Persaud Centre for Caribbean Studies. He is the author of White Creole Culture, Politics and Identity during the Age of Abolition and coeditor of Colonial Lives Across the British Empire. He lives in Reading, UK.

“Mastering the Niger is a skilful, scholarly, and authoritative work, one which demonstrates the authority vested in official and unofficial forms of geographical knowledge and which shows how geographical knowledge about the Niger was, vitally, deeply implicated in that commerce in sugar, slaves, and money which linked west Africa, Caribbean plantations, counting houses in Glasgow, and the uncertainties on maps as to which way the river ran and where it met its end.”
— Journal of Historical Geography

“Lambert has offered a powerful reminder of the significance of racialized practices to the emergence of geography as a discipline and of the intellectual and political challenges this history continues to raise. The book also provides an illuminating and original attempt to think about how subaltern agency can be read through the lives of elite figures in ways which complement recent biographical works such as Clare Anderson’s Subaltern Lives.”
— David Featherstone, University of Glasgow

"Mastering the Niger is an excellent contribution to the history of cartography as a persuasive demonstration of the interlocking social, political and personal dimensions of the production of knowledge, especially map making. This book is a ‘must read’ for scholars and map collectors alike who seek to learn more about the origins and meaning of maps made ‘According to the Best Authorities.’"
— Imago Mundi: The International Journal for the History of Cartography

“James MacQueen never went to Africa but he solved one of the great mysteries of nineteenth-century geography—proving that the mighty Niger River terminated in the Atlantic rather than in the east—through ingenious study of diverse materials and through close interrogation of enslaved people under his control on a Grenadian plantation. David Lambert’s rich and rewarding study of MacQueen and the Atlantic slave system he supported tell us new and important things about how geographical knowledge was produced. The great age of African exploration and Atlantic slavery were inextricably linked, as Lambert shows with admirable skill and energy.”

“What Mastering the Niger achieves is hugely impressive as a contribution to the history of geographical thought, the history of slavery and abolitionism, and Atlantic history.”

“If you want to know what the new history of knowledge looks like, read Mastering the Niger. Ranging from Glasgow to Grenada, David Lambert adapts the sociology of scientific knowledge to examine how the Gradgrind of African geography, James MacQueen, made maps, statistics, tables, and lists count as brute facts in favor of colonization. He reconstructs the role of enslaved knowledges in British geographies of the Niger, while showing how debates over the Niger and colonial policy were always about the contentious authority of fluid and rival forms of geography itself. This crucial connective work draws theoretical knowledge and commercial practice together into a new history of expertise, showing how the techniques of enlightened rationality often served the interests of empire.”

“With Mastering the Niger, David Lambert uncovers profound and unexpected connections between proslavery politics in the British Caribbean and abolitionist interest in West African geography. In Lambert’s skillful treatment, James MacQueen comes to embody the contradictions of the era. A nearly unprecedented integration of the histories of slavery, empire, geography, colonization, and the history of science—each looks a bit different after this landmark work.”