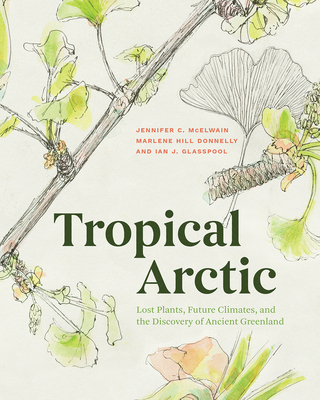 An illustrated visit to the tropical arctic of 205 million years ago when Greenland was green.

While today’s Greenland is largely covered in ice, in the time of the dinosaurs the area was a lushly forested, tropical zone. Tropical Arctic tracks a ten-million-year window of Earth’s history when global temperatures soared and the vegetation of the world responded.

A project over eighteen years in the making, Tropical Arctic is the result of a unique collaboration between two paleobotanists, Jennifer C. McElwain and Ian J. Glasspool, and award-winning scientific illustrator Marlene Hill Donnelly. They began with a simple question: “What was the color of a fossilized leaf?” Tropical Arctic answers that question and more, allowing readers to experience Triassic Greenland through three reconstructed landscapes and an expertly researched catalog of extinct plants. A stunning compilation of paint and pencil art, photos, maps, and engineered fossil models, Tropical Arctic blends art and science to bring a lost world to life. Readers will also enjoy a front-row seat to the scientific adventures of life in the field, with engaging anecdotes about analyzing fossils and learning to ward off polar bear attacks.

Tropical Arctic explains our planet’s story of environmental upheaval, mass extinction, and resilience. By looking at Earth’s past, we see a glimpse of the future of our warming planet—and learn an important lesson for our time of climate change.

Jennifer C. McElwain is the 1711 Chair of Botany at Trinity College Dublin, where she is also director of Trinity College Botanic Garden. She is the author of many publications, including The Evolution of Plants.

Marlene Hill Donnelly is a scientific illustrator for the Field Museum in Chicago. She has illustrated three children’s books, including Big Tracks, Little Tracks.

Ian J. Glasspool is a research scientist and paleobotanist living in Maine. He has authored or coauthored fifty scientific articles.

"Ice-covered Greenland was named misleadingly by tenth-century Norse settlers hoping to attract others. But at the time of the dinosaurs, the label would have been accurate, judging from the fossilized plants intricately reconstructed and pictured in this fascinating study by palaeobotanists Jennifer McElwain and Ian Glasspool, with scientific illustrator Marlene Donnelly. They warn that current greenhouse-gas emissions are becoming comparable in impact to the volcanic emissions that triggered the collapse of Triassic Greenland’s flora."
— Nature

"Tropical Arctic is a story about how plants—the fundamental underpinnings of terrestrial ecosystems—weathered the Triassic–Jurassic mass extinction event. . . . It is not often that a book written about a scientific topic is specifically organised to put emphasis on artwork created from the scientific data, and this makes Tropical Arctic both fascinating and accessible to a wide readership."
— Current Biology

"Tropical Arctic recreates a collapsing ecosystem 200 million years ago in words and visuals that are detailed and beautiful. . . . Warning that humans have become 'a geological-scale force acting on our entire Earth System,' this timely book is engrossing as it relays the dangers of exceeding the limits of plant and animal resilience and overheating an already too hot Earth."
— Foreword

"In this era of rapid environmental change and increasing mean global temperatures, scientists and the public are wont to speculate about what tomorrow may offer. Most think about sea level rise and changes in the frequency and intensity of extreme weather events; few are likely to consider how the deep past may inform the nature and scale of Earth's future landscapes. . . . The authors weave together compelling field stories, historical anecdotes, and fossil analyses to construct a narrative of ecological transformation, mass extinction, and potential hope. Expertly illustrated, through its figures and images the book brings to life the beauty and wonder of an imaginary tropical Greenland."
— Choice Connect

"A must have for anyone with an interest in paleobotany and/or prehistoric Greenland!"
— Birdbooker Report

“A compelling fusion of art and science, Tropical Arctic brings to life a warmer world at the dawn of the Jurassic when Greenland was covered with lush forests and global climate change wrought ecological disruption. Tropical Arctic reveals the creativity and dedication needed to understand our planet’s ancient past. In that distant past, nature proved resilient. How human societies will fare with rapid climate change is much less certain.”
— Sir Peter Crane, president, Oak Spring Garden Foundation

“Tropical Arctic tells the story of how a simple question about the color of leaves sparked a collaboration between science and art in an exploration of forests that flourished in Greenland over 200 million years ago. This book contains a sparkling account of fieldwork in the Arctic that combines tales of pilfering arctic foxes, energetic excavation of fossils on imposing cliffs, and an emergency medical evacuation by helicopter. Cutting-edge science gives way to scissors and glue as artists and scientists join forces to solve questions about the way plants grew in these ancient landscapes. Tropical Arctic is a wonderful synthesis of science and art with a contemporary message about the impact of rapid global warming on high latitude ecosystems.”
— Paul Kenrick, Natural History Museum, London

“In this gracefully written book, paleobotanists Jennifer C. McElwain and Ian J. Glasspool and artist Marlene Hill Donnelly describe changes in the climate and forests of East Greenland hundreds of millions of years ago. They weave together the tools and tricks of both scientists and artists to produce a compelling narrative of discovery, interpretation, and illustration. The book is beautifully illustrated with photographs, sketches, and artistic reconstructions of the Triassic and Jurassic landscapes. The authors are particularly deft at describing all the scientific evidence that goes into such reconstructions.”
— Judith Totman Parrish, University of Idaho