The Outfit: A Parker Novel (Paperback) 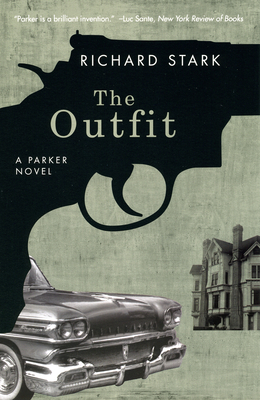 They wanted Parker dead—and a late-night visit from a hitman proved they meant business. Now Parker plans to get even—dead even. Armed with a new face and his usual iron will, Parker is declaring a coast-to-coast war.

In The Outfit, Parker goes toe-to-toe with the mob, hellbent on taking him down. The notorious lone wolf has some extra tricks up his sleeve, and the entire underworld will learn an unforgettable lesson: whatever Parker does, he does deadly.

Richard Stark was one of the many pseudonyms of Donald E. Westlake (1933-2008), a prolific author of noir crime fiction. In 1993 the Mystery Writers of America bestowed the society’s highest honor on Westlake, naming him a Grand Master.

“Whatever Stark writes, I read. He’s a stylist, a pro, and I thoroughly enjoy his attitude.”

“Richard Stark’s Parker novels . . . are among the most poised and polished fictions of their time and, in fact, of any time.”

“Richard Stark writes a harsh and frightening story of criminal warfare and vengeance with economy, understatement and a deadly amoral objectivity—a remarkable addition to the list of the shockers that the French call romans noirs.”

“Parker is a true treasure. . . . The master thief is back, along with Richard Stark.”

“Westlake knows precisely how to grab a reader, draw him or her into the story, and then slowly tighten his grip until escape is impossible.”

“If you’re looking for crime novels with a lot of punch, try the very, very tough novels featuring Parker. . . . The Hunter, The Outfit, The Mourner, and The Man with the Getaway Face are all beautifully paced, tautly composed, and originally published in the early 1960s."

“Parker is refreshingly amoral, a thief who always gets away with the swag.”—Stephen King, Entertainment Weekly

"Parker is a brilliant invention. . . . What chiefly distinguishes Westlake, under whatever name, is his passion for process and mechanics. . . . Parker appears to have eliminated everything from his program but machine logic, but this is merely protective coloration. He is a romantic vestige, a free-market anarchist whose independent status is becoming a thing of the past."

"I wouldn't care to speculate about what it is in Westlake's psyche that makes him so good at writing about Parker, much less what it is that makes me like the Parker novels so much. Suffice it to say that Stark/Westlake is the cleanest of all noir novelists, a styleless stylist who gets to the point with stupendous economy, hustling you down the path of plot so briskly that you have to read his books a second time to appreciate the elegance and sober wit with which they are written."

"If you're a fan of noir novels and haven't yet read Richard Stark, you may want to give these books a try. Who knows? Parker may just be the son of a bitch you've been searching for."

"The University of Chicago Press has recently undertaken a campaign to get Parker back in print in affordable and handsome editions, and I dove in. And now I get it."

"Whether early or late, the Parker novels are all superlative literary entertainments."—Terry Teachout, Weekly Standard

“The UC Press mission, to reprint the 1960s Parker novels of Richard Stark (the late Donald Westlake), is wholly admirable. The books have been out of print for decades, and the fast-paced, hard-boiled thrillers featuring the thief Parker are brilliant.”