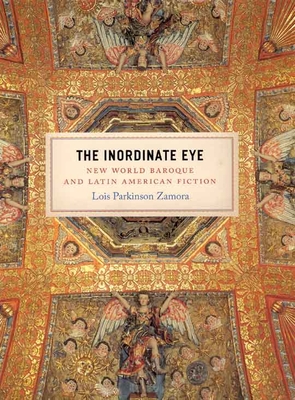 The Inordinate Eye traces the relations of Latin American painting, sculpture, architecture, and literature—the stories they tell each other and the ways in which their creators saw the world and their place in it. Moving from pre-Columbian codices and sculpture through New World Baroque art and architecture to Neobaroque theory and contemporary Latin American fiction, Lois Parkinson Zamora argues for an integrated understanding of visual and verbal forms.

The New World Baroque combines indigenous, African, and European forms of expression, and, in the early decades of the twentieth century, Latin American writers began to recuperate its visual structures to construct an alternative account of modernity, using its hybrid forms for the purpose of creating a discourse of “counterconquest”—a postcolonial self-definition aimed at disrupting entrenched power structures, perceptual categories, and literary forms.

Zamora engages this process, discussing a wide range of visual forms—Baroque façades and altarpieces, portraits of saints and martyrs (including the self-portraits of Frida Kahlo), murals from indigenous artisans to Diego Rivera—to elucidate works of fiction by Borges, Carpentier, Lezama Lima, Sarduy, Garro, García Márquez, and Galeano, and also to establish a critical perspective external to their work. Because visual media are “other” to the verbal economy of modern fiction, they serve these writers (and their readers) as oblique means by which to position their fiction culturally, politically, and aesthetically.

The first study of its kind in scope and ambition, The Inordinate Eye departs radically from most studies of literature by demonstrating how transcultural conceptions of the visual image have conditioned present ways of seeing and reading in Latin America.

Lois Parkinson Zamora is professor of comparative literature and art history at the University of Houston.

"A lift to read…beautifully produced…[Zamora] argues exhilaratingly that an aesthetic of fusion, adornment and exuberance rose phoenix-like in the aftermath of conquest, shaping an influential mode of fantasy, as in the art and architecture of Mexico and the marvelous fictions of Borges.”

“This book is a bold venture joining visual studies with literary studies to revise our narratives of art, history, and literature, and it is also a splendid example of the possibilities of comparative literature as an endeavor engaged with the materiality of its cultural and historical object of investigation….Parkinson Zamora builds her masterful study on the methodological scaffolding that defines Comparative Literature as the field where heterogeneous elements, paradoxical realities, and heterodox visions converge.”