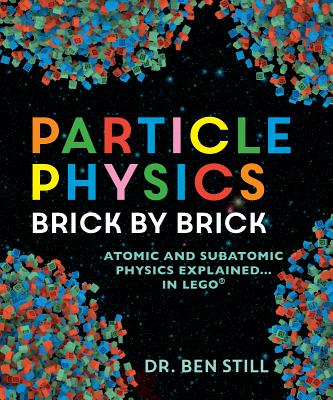 A simple and entertaining introduction to the building blocks of the universe.

Thankfully, understanding atomic and subatomic physics need not be infathomable. LEGO(R) bricks are a great way to visualize the blueprint of the universe, right down to its smallest elements. Particle Physics Brick by Brick explains how and with what the universe came to be. It introduces the Standard Model of Physics, the "rule book" of physics that has been proven correct again and again since its mid-20th century development. Today, it is the gaps in the model that keep physicists busy.

In concise chapters, the book assigns to each atomic element a colored LEGO(R) brick, such as neutrons, leptons and quarks. By assembling actual or imaginary bricks and observing their relationships and interactions, particle physics becomes clear. The book opens with the Standard Model of Physics, the physicists and the discoveries made over history, and directions on how to use the book.

Particle Physics Brick by Brick is a succinct introduction for anyone that wants to gain a basic understanding of the atomic world, its elements and how they interact. By using tangible substitutes - bricks - it brings the unseen atomic world into the realm of the visual.

Dr. Ben Still is a scientist, science writer and educator, and author. He has a PhD in experimental particle physics, and his articles have been published in academic journals. His other books include The Secret Life of the Periodic Table and Brain Explains: Quantum Physics.