U.S. Strategy Against Global Terrorism: How It Evolved, Why It Failed, and Where It Is Headed (Hardcover) 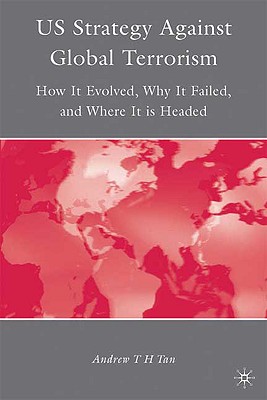 This book examines the various strategies, including Global Counterinsurgency (GCOIN), which have been put forward as alternatives to the Global War On Terror (GWOT), concluding that while a consensus can be found on the key elements of a grand strategy, based on failures in the GWOT, it is far from clear if any GCOIN strategy could work.

“Tan has added another insightful volume to his published works. In this book he provides a cogent, balanced, and objective evaluation of the strategy behind the Global War on Terror, avoiding the polemics so often found in such discussions. Tan not only considers the mistakes that have been made in response to the attacks of 9/11--most obviously the ill-fated invasion of Iraq in 2003--but he leaves little doubt that the invasion of Iraq, unlike the preceding invasion of Afghanistan, led to increases in terrorist activities and led to generalized discontent and doubts about the United States among Muslims. Tan goes further, however, and notes the improvements that made been made in US counterinsurgency strategies in efforts to deal with terrorism around the world.  Finally, he looks to the future and notes what additional changes will be necessary to contain, but not defeat, the current terrorist threats.  Overall, this book is an important contribution to the literature on international relations theories and terrorism.”--James M. Lutz, Processor and Chair of Political Science, Indiana University-Purdue University at Fort Wayne

“Andrew Tan provides an update to the Winston Churchill quip that ‘Americans can always be counted on to do the right thing. . .after they have exhausted all other possibilities.’ His critical review of recent debates on US counterterrorism strategy illustrates change for the better. However, he demonstrates that in the course of finding a good strategy the United States has crucially diminished its capabilities to implement it.”-- Michael Brzoska, Professor and Director of the Institute for Peace Research and Security Policy, University of Hamburg, Germany

“Since al Qaeda attacked America’s most iconic landmarks on 9/11, America’s overwhelmingly kinetic and lethal response has not helped to reduce the threat. The U.S.-led strategy has shaped the global response against terrorism. A pre-eminent threat specialist Andrew Tan’s definitive book on U.S. strategy against global terrorism is a must read for practitioners and scholars. Professor Tan is not afraid to criticize the U.S. response.”--Rohan Gunaratna, Head of RSIS’s International Centre for Political Violence and Terrorism Research, author of Inside al Qaeda: Global Network of Terror