The 23rd Cycle: Learning to Live with a Stormy Star (Paperback) 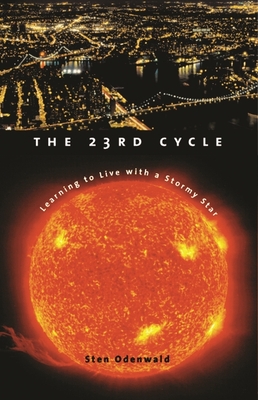 On March 13, 1989, the entire Quebec power grid collapsed, automatic garage doors in California suburbs began to open and close without apparent reason, and microchip production came to a halt in the Northeast; in space, communications satellites had to be manually repointed after flipping upside down, and pressure readings on hydrogen tank supplies on board the Space Shuttle Discovery peaked, causing NASA to consider aborting the mission. What was the cause of all these seemingly disparate events? Sten Odenwald gives convincing evidence of the mischievous--and potentially catastrophic--power of solar storms and the far-reaching effects of the coming "big one" brewing in the sun and estimated to culminate in the twenty-third cycle in the year 2001 and beyond. When the sun undergoes its cyclic "solar maximum," a time when fierce solar flares and storms erupt, fantastic auroras will be seen around the world. But the breathtaking spectacles will herald a potentially disastrous chain of events that merit greater preparation than Y2K. Is anyone listening? The 23rd Cycle traces the previously untold history of solar storms and the ways in which they were perceived by astronomers--and even occasionally covered up by satellite companies. Punctuated with an insert containing dramatic color images showing the erupting sun, the book also includes a history of the record of auroral sightings, accounts of communications blackouts from the twentieth century, a list of industries sensitive to solar storms, and information about radiation and health issues.

Sten Odenwald, an astronomer with Raytheon ITSS, is currently the education and public outreach manager for the NASA IMAGE satellite program. He is the author of The Astronomy Cafe.