Sources of Japanese Tradition: From Earliest Times to 1600 (Introduction to Asian Civilizations #1) (Hardcover) 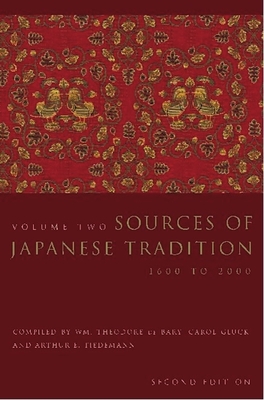 This is book number 1 in the Introduction to Asian Civilizations series.

Sources of Japanese Tradition is a best-selling classic, unrivaled for its wide selection of source readings on history, society, politics, education, philosophy, and religion in the Land of the Rising Sun. In this long-awaited second edition, the editors have revised or retranslated most of the texts in the original 1958 edition, and added a great many selections not included or translated before. They have also restructured volume 1 to span the period from the early Japanese chronicles to the end of the sixteenth century. New additions include: * readings on early and medieval Shinto and on the tea ceremony, * readings on state Buddhism and Chinese political thought influential in Japan, and * sections on women's education, medieval innovations in the uses of history, and laws and precepts of the medieval warrior houses. Together, the selections shed light on the development of Japanese civilization in its own terms, without reference to Western parallels, and will continue to assist generations of students and lay readers in understanding Japanese culture.