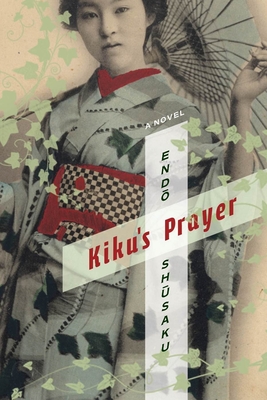 By Shūsaku Endō, Van Gessel (Translator)
$38.00
Backordered. Place an order and we will let you know when to expect your book.

Kiku's Prayer is told through the eyes of Kiku, a self-assured young woman from a rural Japanese village who falls in love with Seikichi, a devoted Catholic man. Practicing a faith still banned by the government, Seikichi is imprisoned but refuses to recant under torture. Kiku's efforts to reconcile her feelings for Seikichi's religion with the sacrifices she makes to free him mirror the painful, conflicting choices Japan faced as a result of exposure to modernity and the West. Seikichi's persecution exemplifies Japan's insecurities, and Kiku's tortured yet determined spirit represents the nation's resilient soul. Set in the turbulent years of the transition from the shogunate to the Meiji Restoration, Kiku's Prayer embodies themes central to Endo Shusaku's work, including religion, modernization, and the endurance of the human spirit. Yet this novel is much more than a historical allegory. It acutely renders one woman's troubled encounter with passion and spirituality at a transitional time in her life and in the history of her people. A renowned twentieth-century Japanese author, Endo wrote from the perspective of being both Japanese and Catholic. His work is often compared with that of Graham Greene, who himself considered Endo one of the century's finest writers.

Endo Shusaku (1923-1996) studied French literature at the University of Lyon from 1950 to 1953. In 1995, Emperor Akihito of Japan presented him with the Order of Culture, the nation's highest honor for contributions in literature, art, and culture. His publications include the internationally acclaimed novel Silence, The Sea and Poison, A Life of Jesus, and Song of Sadness, as well as many other works dealing with childhood, the stigma of being an outsider, the experience of being a foreigner, and the difficulties of following a foreign faith. Van C. Gessel is professor of Japanese at Brigham Young University. He is the author of Three Modern Novelists: Soseki, Tanizaki, Kawabata; coeditor of The Columbia Anthology of Modern Japanese Literature; and translator of seven literary works by Endo Shusaku, including The Samurai and Deep River.