Women Musicians of Uzbekistan: From Courtyard to Conservatory (New Perspectives on Gender in Music) (Paperback) 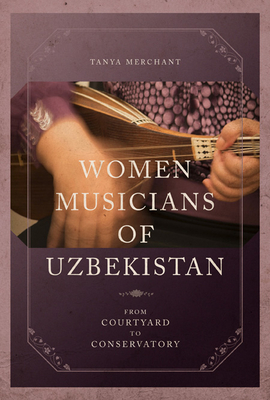 Drawing on fieldwork and music study carried out between 2001 and 2014, Merchant challenges the Western idea of Central Asian women as sequestered and oppressed. Instead, she notes, Uzbekistan's women stand at the forefront of four prominent genres: maqom, folk music, Western art music, and popular music. Merchant's recounting of the women's experiences, stories, and memories underscores the complex role that these musicians and vocalists play in educational institutions and concert halls, street kiosks and the culturally essential sphere of wedding music. Throughout the book, Merchant ties nationalism and femininity to performances and reveals how the music of these women is linked to a burgeoning national identity.

Important and revelatory, Women Musicians of Uzbekistan looks into music's part in constructing gendered national identity and the complicated role of femininity in a former Soviet republic's national project.

Tanya Merchant is an assistant professor of music at the University of California, Santa Cruz.

"Merchant offers a nuanced, intelligent understanding of the relationship between gender and musical culture in contemporary Uzbeck society. In addressing the place of women in the musical life of the country, she throws light not only on the music but also on how the music has negotiated and contributed to the historical dynamic that has existed since the Soviet Union annexed Uzbekistan… A valuable resource for those interested in anthropology, Central Asian studies, gender studies… Highly recommended."--Choice

"Readable and useful not only to those interested in the legacies of Soviet rule, but also to ethnomusicologists and scholars interested in gender issues."--Journal of Folklore Research

"A beautifully textured account of contemporary Uzbekistan's national project, and the central role of women musicians in this construction. . . . Filled with interesting and timely material, this book is truly a wonderful read."--Ellen Koskoff, author of A Feminist Ethnomusicology

"Merchant has listened carefully to the voices of Central Asian women musicians, so this book advances understanding of both a neglected world area and of women's experience in a postcolonial, Islamic-influenced society."--Mark Slobin, author of Folk Music: A Very Short Introduction

"This book provides a timely focus on gender in Central Asian music--an area which deserves greater attention. It includes strong ethnographic material and interviews with musicians, draws on relevant theoretical literature, and addresses a range of issues concerning gender and the performance of Uzbek national identity, genre, and gendered economies of performance."--Rachel Harris, author of The Making of a Musical Canon in Chinese Central Asia: The Uyghur Twelve Muqam