Six Impossible Things: The Mystery of the Quantum World (Hardcover) 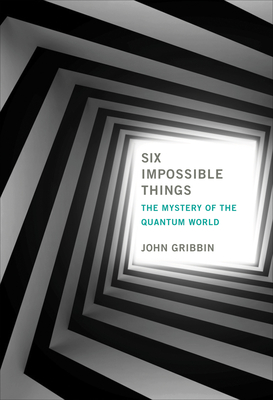 “An elegant and accessible” investigation of quantum mechanics for non-specialists—“highly recommended” for students of the sciences, sci-fi fans, and anyone interested in the strange world of quantum physics (Forbes)

Rules of the quantum world seem to say that a cat can be both alive and dead at the same time and a particle can be in two places at once. And that particle is also a wave; everything in the quantum world can described in terms of waves—or entirely in terms of particles. These interpretations were all established by the end of the 1920s, by Erwin Schrödinger, Werner Heisenberg, Paul Dirac, and others. But no one has yet come up with a common sense explanation of what is going on. In this concise and engaging book, astrophysicist John Gribbin offers an overview of six of the leading interpretations of quantum mechanics.

John Gribbin, described by the Spectator as “one of the finest and most prolific writers of popular science around,” is the author of In Search of Schrödinger's Cat, The Universe: A Biography, 13.8: The Quest to Find the True Age of the Universe and the Theory of Everything, and other books. He is a Visiting Fellow in Astronomy at the University of Sussex, UK.

“An accessible primer on all things quantum . . . rigorous and chatty.”
—Sunday Times

“‘Quantum physics is strange.’ These are the first words of John Gribbin’s brilliant new book Six Impossible Things . . . [a] pocket-sized analysis of the six most important interpretations of quantum mechanics.”
—Engineering & Technology

“Gribbin gives us a feast of precision and clarity, with a phenomenal amount of information for such a compact space. It’s a TARDIS of popular science books, and I loved it . . . Gribbin manages to encapsulate what are sometimes very complex ideas in an approachable fashion. This could well be the best piece of writing this grand master of British popular science has ever produced, condensing as it does many years of pondering the nature of quantum physics into a compact form.”
—Popular Science (UK)

“An elegant and accessible attempt to explain quantum physics to the non-specialist . . . Highly recommended for students of the sciences and fans of science fiction, as well as for anyone who is curious to understand the strange world of quantum physics.”
—Forbes