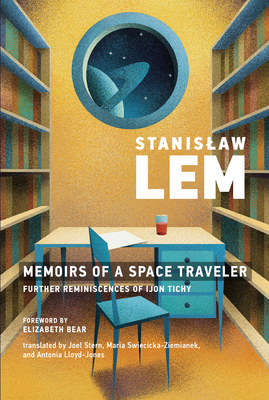 Memoirs of a Space Traveler follows the adventures of Ijon Tichy, a Gulliver of the space age, who leads readers through strange experiments involving, among other puzzling phenomena, faulty time machines, intelligent washing machines, and suicidal potatoes. The scientists Tichy encounters make plans that are grandiose, and strike bargains that are Faustian. They pursue humanity’s greatest and most ancient obsessions: immortality, artificial intelligence, and top-of-the-line consumer items.

By turns satirical, philosophical, and absurd, these stories express the most starkly original and prescient notions of a master of speculative fiction.

Stanisław Lem (1921–2006), a writer called “worthy of the Nobel Prize” by the New York Times, was an internationally renowned author of novels, short stories, literary criticism, and philosophical essays. His books have been translated into forty-four languages and have sold more than thirty million copies.

“The late Lem (1921–2006) demonstrates his mastery of satirical science fiction in this witty collection of six stories . . . This classic collection will appeal to readers who like their science fiction light and effervescent.”
—Publishers Weekly

“The release of these new volumes seems to expand the possibilities of what a university publisher can do.”
—LitHub

“Fourteen years after his death, the universe is still struggling to catch up with the vast creative force that was Stanisław Lem. And for my money, it won't be surpassing him anytime soon . . . Enjoying the genius of Lem requires readerly dexterity and a willingness to go wherever the author takes you . . . These marvelous, absorbing and often hilarious books make our weary universe seem pale and undistinguished by comparison.”
—The Washington Post