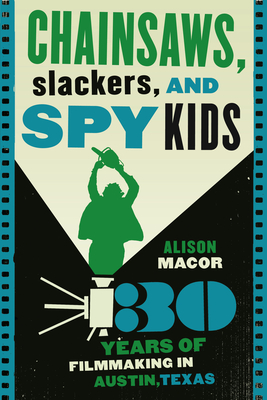 During the 1990s, Austin achieved "overnight" success and celebrity as a vital place for independent filmmaking. Directors Richard Linklater and Robert Rodriguez proved that locally made films with regional themes such as Slacker and El Mariachi could capture a national audience. Their success helped transform Austin's homegrown film community into a professional film industry staffed with talented, experienced filmmakers and equipped with state-of-the art-production facilities. Today, Austin struggles to balance the growth and expansion of its film community with an ongoing commitment to nurture the next generation of independent filmmakers.

Chainsaws, Slackers, and Spy Kids chronicles the evolution of this struggle by re-creating Austin's colorful movie history. Based on revealing interviews with Richard Linklater, Robert Rodriguez, Mike Judge, Quentin Tarantino, Matthew McConaughey, George Lucas, and more than one hundred other players in the local and national film industries, Alison Macor explores how Austin has become a proving ground for contemporary independent cinema. She begins in the early 1970s with Tobe Hooper's horror classic, The Texas Chainsaw Massacre, and follows the development of the Austin film scene through 2001 with the production and release of Rodriguez's $100-million blockbuster, Spy Kids. Each chapter explores the behind-the-scenes story of a specific movie, such as Linklater's Dazed and Confused and Judge's Office Space, against the backdrop of Austin's ever-expanding film community.

Alison Macor is a freelance writer and former film critic for the Austin Chronicle and the Austin American-Statesman. She has taught film courses at the University of Texas, Austin Community College, and the Austin Museum of Art.