Madonnaland: And Other Detours into Fame and Fandom (American Music Series) (Paperback) 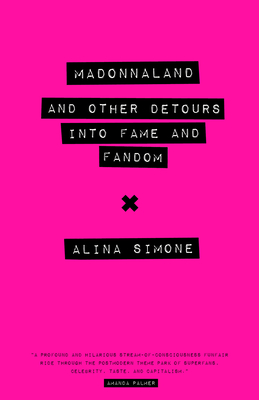 When Alina Simone agreed to write a book about Madonna, she thought it might provide an interesting excuse to indulge her own eighties nostalgia. Wrong. What Simone discovered instead was a tidal wave of already published information about Madonna—and her own ambivalence about, maybe even jealousy of, the Material Girl’s overwhelming commercial success. With the straight-ahead course stymied, Simone set off on a quirky detour through the backroads of celebrity and fandom and the people who love or loathe Madonna. In this witty, sometimes acerbic, always perceptive chronicle, Simone begins by trying to understand why Madonna’s birthplace, Bay City, Michigan, won’t even put up a sign to celebrate its most famous citizen, and ends by asking why local bands who make music that’s authentic and true can disappear with barely a trace. In between, she ranges from Madonna fans who cover themselves with tattoos of the singer’s face and try to make fortunes off selling her used bustiers and dresses, to Question Mark and the Mysterians—one-hit wonders best known for “96 Tears”—and Flying Wedge, a Detroit band that dropped off an amazing two-track record in the office of CREEM magazine in 1972 and vanished, until Simone tracked it down. Filled with fresh insights about the music business, fandom, and what it takes to become a superstar, Madonnaland is as much a book for people who, like Simone, prefer “dark rooms, coffee, and state-subsidized European films filled with existential despair” as it is for people who can’t get enough of Madonna.

ALINA SIMONENew York, New YorkSimone is a singer-turned-writer whose work has appeared in the New York Times, Slate, Wall Street Journal, and many other publications. She is the author of the essay collection You Must Go and Win and the novel Note to Self, as well as a regular contributor to the PRI news radio show The World.