Between Resistance and Martyrdom: Jehovah's Witnesses in the Third Reich (Paperback) 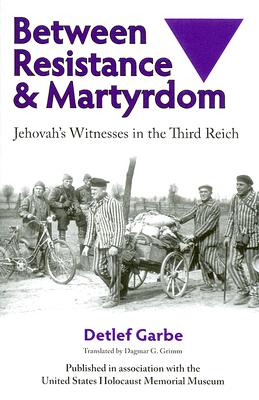 Between Resistance and Martyrdom is the first comprehensive historical study of the persecution of Jehovah’s Witnesses during the Holocaust era. Refusing to perform military service under Germany’s Third Reich due to their fundamental belief in nonviolence, Jehovah’s Witnesses caught the attention of the highest authorities in the justice system, the police, and the SS.
Although persecuted and banned from practicing their beliefs by the Nazi regime in 1933, the Jehovah’s Witnesses’ unified resistance has been largely forgotten. Basing his work on a wide range of sources, including documents and archives previously unconsidered as well as critical analyses of Jehovah’s Witness literature and survivor interviews, Detlef Garbe chronicles the Nazi’s relentless persecution of this religious group before and during World War II.
The English translation of this important work features a series of original photographs not published in the German edition. These striking images bring a sense of individual humanity to this story and help readers comprehend the reality of the events documented. Between Resistance and Martyrdom is an indispensable work that will introduce an English-speaking audience to this important but lesser-known part of Holocaust history.

Detlef Garbe is director of the Neuengamme Concentration Camp Memorial in Hamburg, Germany. He is the author of numerous publications about the history of the concentration camps, Jehovah’s Witnesses and other marginal victim groups, military justice, and Germany’s postwar confrontations with the National Socialist past. He is also the editor of Beiträge zur Geschichte der nationalsozialistischen Verfolgung in Norddeutschland.

Dagmar G. Grimm is a native of Bremen, Germany, who now lives in the United States. Her work as a translator and editor includes other works on the persecution of Jehovah’s Witnesses under the Hitler regime as well as under communist rule in East Germany.

“The persecution of Jehovah's Witnesses in Germany under National Socialism is not a new subject, but Detlef Garbe's book takes historical scholarship to new levels of subtlety and sophistication. His insights into the moral and legal resistance mounted by the Witnesses against the Nazis both inside and outside concentration camps are path-breaking and provocative. All students of persecuted religious minorities are greatly in his debt for bringing to light so much fresh evidence concerning the role of Jehovah's Witnesses in resisting National Socialism. This is historical investigation of the highest importance and quality.”—James A. Beckford, University of Warwick

“Between Resistance and Martyrdom is a strong book that tells a compelling and deeply important, understudied story.”—Michael Berenbaum, author of A Promise to Remember: The Holocaust in the Words and Voices of Its Survivors

“This detailed and fascinating book includes new research and new insights into a topic that has received growing attention in the past two decades. . . At this point, Garbe’s study is the most sweeping account of the Jehovah’s Witness in the Third Reich…”—Holocaust and Genocide Studies