Restoring the Power of Unions: It Takes a Movement (Hardcover) 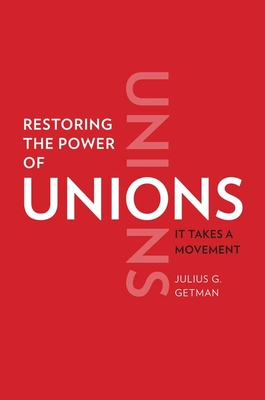 By Julius G. Getman
Unavailable. Orders will be auto-cancelled.

The labor movement is weak and divided. Some think that it is dying. But Julius Getman, a preeminent labor scholar, demonstrates through examination of recent developments that a resurgent labor movement is possible. He proposes new models for organizing and innovating techniques to strengthen the strike weapon. Above all, he insists that unions must return to their historical roots as a social movement.

Julius G. Getman is the Earl E. Sheffield Regents Chair Professor of Law at the University of Texas at Austin Law School.

“Jack Getman's comprehensive study of the hotel workers union gave me new appreciation of an organization that has indeed tried to change to win. Restoring union power takes more than just rhetoric and top-down restructuring.  It requires long-term workplace and community-based struggles, for bargaining rights and better contracts, of the sort brilliantly described in Getman's book.”—Steve Early, former CWA organizer and author of Embedded With Organized Labor: Journalistic Reflections on the Class War at Home

"Restoring the Power of Unions is a valuable book for all who wish to understand the prospects for American unions. It is candid, well researched, and well written. Jack Getman also provides cogent recommendations for how to restore the power of that important institution.”—Ray Marshall, The University of Texas
— Ray Marshall

"A highly detailed [and] meticulously researched volume. . . . Getman is a scholarly counsel, instructing workers on the fundamentals of organizing and maintaining effective unions."--History News Network

"Getman's book neatly divides into a history, a diagnosis, and suggested cures. The reader comes away from Getman's book thinking that unions might yet survive."--Austin American Statesman