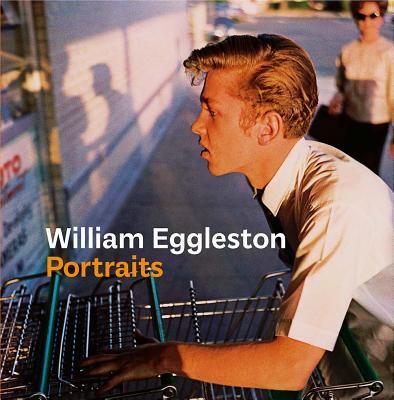 “So many people take those simple snapshots of life, but there’s something about Eggleston that no one can match.” —Sofia Coppola

The eminent American photographer William Eggleston (b. 1939) was a pioneer in exploring the artistic potential of color photography. Eggleston made a name for himself with his eccentric, unexpected compositions of everyday life that were nonetheless rife with implied narrative, elevating the commonplace to art. This sumptuously illustrated book features Eggleston’s masterful portraits, including the artist's first color photograph—a study of a young clerk pushing shopping carts at a supermarket—from his Los Alamos series. There are many other familiar and beloved images as well as some previously unseen photographs from his long and productive career.

Many of Eggleston’s poetic photographs portray life in his home state of Tennessee, and the people he encountered there. Eggleston frequented the 1970s Memphis club scene, where he met, befriended, and photographed musicians such as fellow Southerners Alex Chilton and Ike Turner. He also photographed celebrities including Dennis Hopper, Walter Hopps, and Eudora Welty, and became a fixture of Andy Warhol’s Factory scene, dating the Warhol protégé Viva. Over the past half century, he has created a powerful and enduring body of work featuring friends and family, musicians, artists, and strangers. In addition to the lavish reproductions of Eggleston’s portraits, this volume includes an essay and chronology, plus an interview with Eggleston and his close family members that gives new insights into his images and artistic process.

Published in association with the National Portrait Gallery, London

Phillip Prodger is head of photographs at the National Portrait Gallery, London.

"Eggleston never diminishes what he sees but somehow enlarges both the momentous and the trivial. . . . Each photograph is freighted with untold stories."—Adrian Searle, Guardian

"The abundance of recent collections of Eggleston’s work does not diminish the allure of this one. . . . Some of the pictures are extremely well known . . . others are less so: page after page of riveting, often untitled character studies. . . . If you’re curious about Eggleston . . . this book is not a bad place to start."—Luc Sante, New York Times Book Review ("Top Photography Books")

“Eggleston’s portraits . . . always look like movie stills, and you feel you’ve seen the movie. It’s color that sets the scene, compels you to look—something has happened, or is about to happen. It is not surprising that Eggleston’s cinematic painterliness has long been a favorite of film directors such as Sofia Coppola, Gus Van Sant, David Lynch, and the Coen brothers.”—Gini Alhadeff, New York Review of Books