The Shape of a Life: One Mathematician's Search for the Universe's Hidden Geometry (Hardcover) 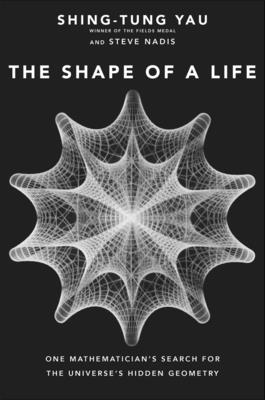 A Fields medalist recounts his lifelong transnational effort to uncover the geometric shape—the Calabi-Yau manifold—that may store the hidden dimensions of our universe.

“An unexpectedly intimate look into a highly accomplished man, his colleagues and friends, the development of a new field of geometric analysis, and a glimpse into a truly uncommon mind.”—Nina MacLaughlin, Boston Globe

“Engaging, eminently readable . . . For those with a taste for elegant and largely jargon-free explanations of mathematics, The Shape of a Life promises hours of rewarding reading.”—Judith Goodstein, American Scientist

Harvard geometer and Fields medalist Shing-Tung Yau has provided a mathematical foundation for string theory, offered new insights into black holes, and mathematically demonstrated the stability of our universe. In this autobiography, Yau reflects on his improbable journey to becoming one of the world’s most distinguished mathematicians. Beginning with an impoverished childhood in China and Hong Kong, Yau takes readers through his doctoral studies at Berkeley during the height of the Vietnam War protests, his Fields Medal–winning proof of the Calabi conjecture, his return to China, and his pioneering work in geometric analysis. This new branch of geometry, which Yau built up with his friends and colleagues, has paved the way for solutions to several important and previously intransigent problems.

With complicated ideas explained for a broad audience, this book offers readers not only insights into the life of an eminent mathematician, but also an accessible way to understand advanced and highly abstract concepts in mathematics and theoretical physics.

Shing-Tung Yau is the William Caspar Graustein Professor of Mathematics at Harvard University. He has been awarded a Fields Medal, a MacArthur Fellowship, a National Medal of Science, the Wolf Prize in Mathematics, the Crafoord Prize, the Veblen Prize, and other honors. Steve Nadis is a science writer and contributing editor to Astronomy and Discover magazines.

“The book is an unexpectedly intimate look into a highly accomplished man, his colleagues and friends, the development of a new field of geometric analysis, and a glimpse into a truly uncommon mind.”—Nina MacLaughlin, Boston Globe

"Fascinating, and an essential read for anyone interested in the history of modern mathematics.”—Peter Woit, Columbia University, Not Even Wrong

“Traces the remarkable arc of Yau’s life, from poverty and exile in Hong Kong to international renown as a Chinese-American mathematician and the first Chinese winner of the Fields Medal, often described as the Nobel Prize of mathematics.”—Science News

"A well-written and readable story of a very accomplished man’s life."—Mathematical Association of America Reviews

“Engaging, eminently readable. . . . For those with a taste for elegant and largely jargon-free explanations of mathematics, The Shape of a Life promises hours of rewarding reading. . . . [Yau’s] account of life in his natural home—mathematics—and his quest to uncover deep truths about nature proves to be a terrific read.”—Judith Goodstein, American Scientist

"Yau and Nadis dive into explanations of some extremely complicated math and do so with an enviable clarity and precision. The book also offers a compelling portrait of the intellectual life of a mathematician. The Shape of a Life frequently talks about the conferences and colleagues that inspired Yau and influenced his work, a welcome antidote to the stereotype of the solitary theorist locked away in his office.”—Physics Today

"Author Yau, who was awarded a Fields Medal in 1983 and other signiﬁcant honors, tells in great detail the story of his life, and more importantly, his interpretation in personal terms of its events. . . . Mathematics majors from China may ﬁnd this book particularly inspiring."—Paul J. Campbell, Mathematics Magazine

Finalist in the  PROSE Awards mathematics category, sponsored by the Association of American Publishers

“Yau and Nadis’s The Shape of a Life opens a window into the fascinating mind and world of today’s equivalent of Apollonius of Perga, ‘The Great Geometer’ of antiquity.”—Mario Livio, author of Brilliant Blunders

“This book tells a fascinating story of a life lived between multiple cultures—China and the West, and mathematics and physics. Yau's journey from poverty in Hong Kong to the top levels of the mathematics world was not a simple one.”—Edward Witten, Institute for Advanced Study

"Candid, deep, and truly inspiring, The Shape of a Life is studded with unexpected insights into Yau's thinking. An extraordinary story about an extraordinary person."—Gish Jen, author of The Girl at the Baggage Claim: Explaining the East-West Culture Gap

“The remarkable story of one of the world's most accomplished mathematicians, Shing-Tung Yau, who has made profound contributions in pure mathematics, general relativity, and string theory. Yau’s personal journey—from escaping China as a youngster, leading a gang outside Hong Kong, becoming captivated by mathematics, to making breakthroughs that thrust him on the world stage—inspires us all with humankind's irrepressible spirit of discovery.”—Brian Greene, author of The Elegant Universe