Now It Can Be Told: The Story Of The Manhattan Project (Paperback) 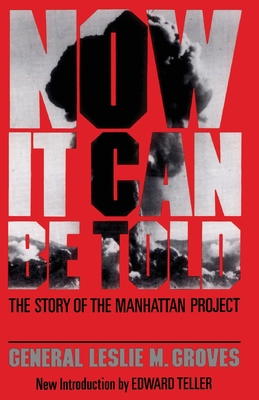 General Leslie Groves and J. Robert Oppenheimer were the two men chiefly responsible for the building of the first atomic bomb at Los Alamos, code name "The Manhattan Project." As the ranking military officer in charge of marshalling men and material for what was to be the most ambitious, expensive engineering feat in history, it was General Groves who hired Oppenheimer (with knowledge of his left-wing past), planned facilities that would extract the necessary enriched uranium, and saw to it that nothing interfered with the accelerated research and swift assembly of the weapon.This is his story of the political, logistical, and personal problems of this enormous undertaking which involved foreign governments, sensitive issues of press censorship, the construction of huge plants at Hanford and Oak Ridge, and a race to build the bomb before the Nazis got wind of it. The role of groves in the Manhattan Project has always been controversial. In his new introduction the noted physicist Edward Teller, who was there at Los Alamos, candidly assesses the general's contributions-and Oppenheimer's-while reflecting on the awesome legacy of their work.

Lieutenant General Leslie Richard Groves, Jr. (1896-1970) was a United States Army Corps of Engineers officer who oversaw the construction of the Pentagon and directed the Manhattan Project, a top secret research project that developed the atomic bomb during World War II.