You're Making Me Hate You: A Cantankerous Look at the Common Misconception That Humans Have Any Common Sense Left (Hardcover) 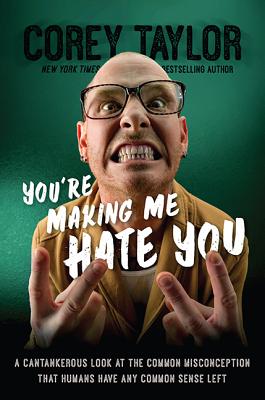 Corey Taylor has had it. Had it with the vagaries of human behavior and life in this postmodern digital blanked-out waiting room that passes for a world. Reality TV, awful music, terrible drivers, megamalls, airports, family reunions, bad fashion choices, other people's monstrous children, and badly-behaved "adult" human beings are warping life in the twenty-first century into an often-unbearable endurance test of one's patience, fortitude, and faith. You're Making Me Hate You is a blisteringly funny diatribe that skewers the worst aspects of human behavior with a knowing eye for every excruciating detail, told in the vivid way that only Corey Taylor can.

Like his previous bestselling forays, You're Making Me Hate You is an unflinching glimpse into the mind of Corey Taylor, who spares no one from his seething gaze. Make no mistake: this is not the Corey Taylor you run into at meet-and-greets or in line at the coffee shop. This is not the kind and cuddly guy who kisses babies and takes pictures with your mom while leaving a voicemail for that distant cousin in college. This is not the loveable scamp who can poke just as much fun at himself as he does at the various rubes around him, though to be fair he does save one chapter for a brutal and lacerating self-analysis. This is Corey Motherfucking Taylor. This is the Great Big Mouth. This is that bastard you wonder about when you listen to Slipknot and Stone Sour.

Funny, profane, blasphemous, and above all right on target, You're Making Me Hate You is pure Corey Taylor unleashed, exposing the underbelly of human depravity in all its ragged glory.

Corey Taylor is the New York Times bestselling author of Seven Deadly Sins, A Funny Thing Happened on the Way to Heaven, and You're Making Me Hate You. Lead singer of rock bands Slipknot and Stone Sour, Taylor has earned eleven Platinum records, forty-three Gold records, and a Grammy. A native of Iowa, he spends his time between there, Las Vegas, and his suitcase.

Praise for You're Making Me Hate You

Sonic Sound Magazine, 7/7/15
“An enjoyable read that will have you nodding in agreement and chuckling at Corey's expletive-filled, but justifiable rants.”

Popmatters, 9/1/15
“Taylor's third book takes a critical and shameless look at the state of society…The selling point here is his grouchy, comedic take on the human condition, but the real depth comes from Taylor's keen awareness and humanity. While nobody can be the authority on people watching, in his detail Taylor comes very close. …his power comes from his wicked smarts and observational skills he calls, “anthropological research”. You're Making Me Hate You is a fun read…”
—-