Eat Me: The Food and Philosophy of Kenny Shopsin: A Cookbook (Hardcover) 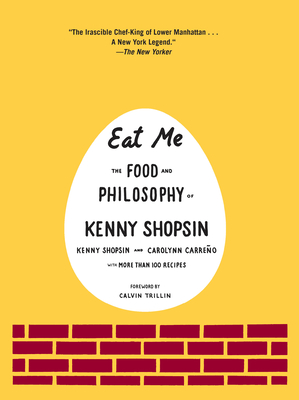 Kenny has finally put together his 900-plus-item menu and his unique philosophy—imagine Elizabeth David crossed with Richard Pryor—to create Eat Me, the most profound and profane cookbook you’ll ever read. His rants—on everything from how the customer is not always right to the art of griddling; from how to run a small, ethical, and humane business to how we all should learn to cook in a Goodnight Moon world where everything you need is already in your own home and head—will leave you stunned or laughing or hungry. Or all of the above.

With more than 120 recipes including such perfect comfort foods as High School Hot Turkey Sandwiches, Cuban Bean Polenta Melt, and Cornmeal-Fried Green Tomatoes with Comeback Sauce, plus the best soups, egg dishes, and hamburgers you’ve ever eaten, Eat Me is White Trash Cooking for the twenty-first century, as unforgettable and mind-boggling as its author.

Kenny Shopsin is a self-taught chef who has developed his own inimitable style: he colors outside of the lines and then uses the crayons in his pancakes. He lives in Greenwich Village.

Carolynn Carreño is a James Beard Award–winning journalist and the coauthor of 100 Ways to Be Pasta, Once Upon a Tart, and A Twist of the Wrist. She lives in Los Angeles and New York.

“[This book is] gorgeous and breathtakingly detailed . . . Kenny Shopsin is an unreformed hippie who has run a small restaurant in New York City since the 1970s. He cooks with childlike glee (his book contains his brilliant macaroni-and-cheese pancake recipe), and he is famous for turning out guests he finds unworthy of his scrambled eggs. . . . Mr. Shopsin is a man equally obsessed and appetite-ridden, though what pulls the reader through Eat Me is a kind of horrified, hilarious amazement. Is it true that he will flat-out refuse to serve any customer a cheese steak without onions, or a Cobb salad without bacon? Did he really just compare pressing a burger down on the griddle to masturbation? (He knows he shouldn’t do it, because it dries out the beef, but he can’t help it sometimes; then he feels bad afterward.). Reading about Shopsin’s is actually more fun than eating at Shopsin’s; the book provides access to the food without the yelling and the edge of fear.”
–Julia Moskin, New York Times


“[Kenny Shopsin] is outsize in every way, and his food is gloriously excessive. The book not only contains about 100 recipes, it’s a history of the store and a philosophy of life.
–John Hodgman, New York Post


“[At Shopsin’s] I was transported by some of the most satisfying food I’ve ever been privileged to eat. Now, the notoriously publicity-shy Kenny Shopsin has written a book (with Carolynn Carreño) about the philosophy and history of the restaurant, called Eat Me: The Food and Philosophy of Kenny Shopsin, and it, too, is an utterly satisfying, utterly peculiar experience. . . . Shopsin’s memoir is like the man: loud, opinionated, warm, exuberant and absolutely delightful. . . . this book is just purely magic. It’s a manifesto for cranky, lovable, excessive individualism. It’s a call-to-arms to woo the muse of the odd and thumb your nose at convention. And it’s got some damned tasty recipes.”
–Cory Doctorow, boingboing.net


“Eat Me: The Food and Philosophy of Kenny Shopsin blends recipes with his uncensored thoughts on cooking.”
–Christine Muhlke, New York Times Magazine


“[Shopsin says], ‘People are afraid of being mediocre, of being ordinary.’ Happily, his sensible, ornery book is neither. . . .one of the [year’s] best. Grade: A.”
–Jennifer Reese, Entertainment Weekly


“ . . . brilliant, hilarious and infuriating . . . The book, like the store, is an elegy to a dying New York. . . . Oh yes: There are recipes too. A lot of them, all straightforward and without pretense. . . . wonderfully written . . . Eat Me is probably the safest way to understand and appreciate Kenny Shopsin.”
–Jesse Wegman, New York Observer


“[Kenny’s] no fuss approach to cooking makes his recipes perfect for the home chef–so if he ever refuses to let you in [to his restaurant], at least you can still eat his food!”
–Moderntonic.com


“Kenny Shopsin creates a book of enduring wisdom . . . This could go down as the Book of Five Rings of short-order cookery.”
–New York magazine blog, “Grub Street”


“I have known Kenny Shopsin for 25 years, and he is profane, unreasonable, more than occasionally rude, charming, funny, and totally ridiculous–sometimes all simultaneously. He's also a really good cook who can make me laugh, even while insulting me. So based on all the above, I was thrilled when we received an advance copy of Kenny's cookbook-memoir-philosophical tome, Eat Me: The Food and Philosophy of Kenny Shopsin. I knew it would be like Kenny, endlessly fascinating, sometimes infuriating, and totally engaging.”
–Ed Levine, Seriouseats.com


“I never thought I'd say this but Kenny Shopsin is the New York version of me! I love the way he cooks, I love the way he thinks, and I love the way he writes about food, family and life. This is as entertaining as a book can be. And I hope the next time I'm in his neck of the woods, he doesn't throw me out of his restaurant 'cause I am definitely going there!”
–Paula Deen


“Kenny Shopsin hates publicity the way a magnet must hate metal filings. . . . this supposedly reluctant restaurateur now adds to his own troubles by releasing a totally hilarious and surprisingly touching treatise on cooking, customer loyalty and family bonds. . . . the real treat is Shopsin’s salty philosophizing. . . . writer Calvin Trillin and his wife, Alice, pop up throughout the book, providing not only happy reminiscences, but a roux of poignancy as both Shopsin and Trillin become widowers, bonded together over the love of a decent meal, quickly rendered.”
Publishers Weekly (starred)