Dangerous Business: The Risks of Globalization for America (Hardcover) 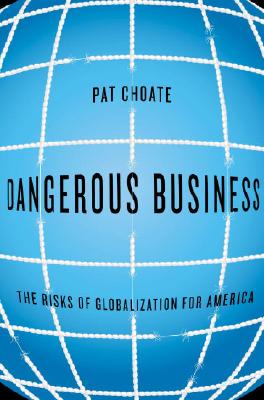 From one of the most respected and vigorous economic thinkers in Washington, a wake-up call about the perils of unfettered globalization. In this impassioned, prescient book, Pat Choate shows us that while increased worldwide economic integration has some benefits for our fiscal efficiency, it also creates dependencies, vulnerabilities, national security risks, and social costs that now outweigh its advantages. He takes the long view of developments such as technology-driven progress, the offshoring of jobs, and open trade, arguing that current U.S. policies are leading to worldwide economic and political instability, in much the same way as before the Great Depression.

Choate writes convincingly about the Defense Department’s growing dependence on foreign sources for its technologies, the leasing of parts of our interstate highway system to overseas investors, China’s economic mercantilism, and international currency manipulation that damages the dollar. We have been borrowing heavily from foreign lenders, who by 2009 will own more than half of the Treasury debt, a third of U.S. corporate bonds, and a sixth of U.S. corporate assets—all of which, if handled improperly, could trigger a global economic collapse.

But our economic forecast need not be dire. Choate sees a way out of these dilemmas and presents politically viable steps the United States can take to remain sovereign, prosperous, and secure. He presents bold new research that identifies the special interests and structural corruption that have overtaken our democracy—and shows how they can be corrected. He illustrates how our policy-making and legislative process, currently beholden to the highest bidder, can be transformed from one of corporatism and elitism into one of greater transparency. Clear-eyed and persuasive, this is sure to be one of the most widely discussed books of the year.

“[An] articulate assessment of America’s position in the global economy . . . Choate exposes the dark side of globalization with well-argued points on the dangers Americans face in lowered safety standards for imported food and pharmaceuticals, underemployment, the loss of national sovereignty, and elites with divided loyalties.”
–Library Journal