The Ordinary Acrobat: A Journey Into the Wondrous World of the Circus, Past and Present (Hardcover) 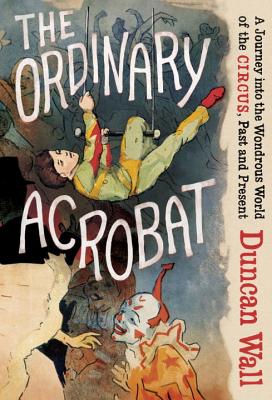 The extraordinary story of a young man’s plunge into the unique and wonderful world of the circus—taking readers deep into circus history and its renaissance as a contemporary art form, and behind the (tented) walls of France’s most prestigious circus school.

When Duncan Wall visited his first nouveau cirque as a college student in Paris, everything about it—the monochromatic costumes, the acrobat singing Simon and Garfunkel, the juggler reciting Proust—was captivating. Soon he was waiting outside stage doors, eagerly chatting with the stars, and attending circuses two or three nights a week. So great was his enthusiasm that a year later he applied on a whim to the training program at the École Nationale des Arts du Cirque—and was, to his surprise, accepted.

Sometimes scary and often funny, The Ordinary Acrobat follows the (occasionally literal) collision of one American novice and a host of gifted international students in a rigorous regimen of tumbling, trapeze, juggling, and clowning. Along the way, Wall introduces readers to all the ambition, beauty, and thrills of the circus’s long history: from hardscrabble beginnings to Gilded Age treasures, and from twentieth-century artistic and economic struggles to its brilliant reemergence in the form of contemporary circus (most prominently through Cirque du Soleil). Readers meet figures past—the father of the circus, Philip Astley; the larger-than-life P. T. Barnum—and present, as Wall seeks lessons from innovative masters including juggler Jérôme Thomas and clown André Riot-Sarcey. As Wall learns, not everyone is destined to run away with the circus—but the institution fascinates just the same.

Brimming with surprises, outsized personalities, and plenty of charm, The Ordinary Acrobat delivers all the excitement and pleasure of the circus ring itself.

Duncan Wall studied as a Fulbright scholar at France's ecole Nationale des Arts du Cirque de Rosny-sous-Bois. He is on the board of directors for the American Youth Circus Organization and was the founder and co-artistic director of the Candidatos, an acclaimed clown-theater company recognized by "The" New York Times for its contribution to the flowering of contemporary clowning. He lives in Montreal, where he teaches circus history and criticism at the ecole Nationale de Cirque, Canada's national circus school.

“Lovely…There is plenty in The Ordinary Acrobat to set circusphile and circus-skeptic alike to dreaming.”
—The Washington Post

“An exquisite exposition…Proving himself even more adroit verbally than physically, Wall offers a revelatory love letter to the simultaneously ancient and contemporary art of acrobatics, the circus, and its denizens.”
—Library Journal

“In this enchanting memoir sprinkled with historical anecdotes, Wall pulls the reader into the world of circus, past and present…his captivating journey of discovery may lead others to consider running away to join one.”
—Publisher’s Weekly

“Wall is a charming guide… [his] appreciation of the circus is deepened by his understanding of its long and distinct history.”
—The New Republic

“If ever you have the urge to run away and join the circus, you can save yourself the trip and still have the thrill of it all by reading The Ordinary Acrobat. Duncan Wall’s adventures as a novitiate in a Parisian circus school are wonderfully entertaining. A beautifully written account of life past and present under the big top.”
—Eric Lax, author of Woody Allen: A Biography

“The Ordinary Acrobat is an incandescent odyssey—personally and historically—into the captivating transnational world of the circus. A fascinating, funny, effervescent story told with great affection.”
—Janet M. Davis, author of Circus Age: Culture and Society Under the American Big Top

“Wall is intoxicated and obsessed with the circus, and…it’s infectious.”
—Biographile


“Lively and wide-ranging…Wall’s eye for anecdote, in both past and present, is sharp.”
—The Seattle Times