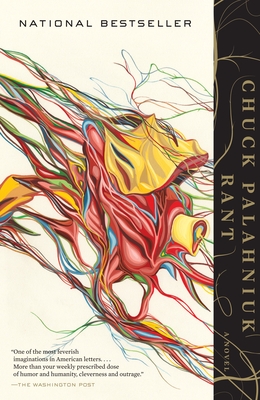 Buster “Rant” Casey just may be the most efficient serial killer of our time. A high school rebel, Rant Casey escapes from his small town home for the big city where he becomes the leader of an urban demolition derby called Party Crashing. Rant Casey will die a spectacular highway death, after which his friends gather the testimony needed to build an oral history of his short, violent life. With hilarity, horror, and blazing insight, Rant is a mind-bending vision of the future, as only Chuck Palahniuk could ever imagine.

Chuck Palahniuk's seven novels are the bestselling Haunted, Lullaby, Fight Club (which was made into a film by director David Fincher), Diary, Survivor, Invisible Monsters, and Choke. He is also the author of the nonfiction profile of Portland, Fugitives and Refugees, published as part of the Crown Journeys series, and the nonfiction collection Stranger Than Fiction. He lives in the Pacific Northwest.

“One of the most feverish imaginations in American letters. . . . More than your weekly prescribed dose of humor and humanity, cleverness and outrage.”
—The Washington Post

“Brilliant. . . extremely fun. . . . With his love of contemporary fairytales that are gritty and dirty rather than pretty, Palahniuk is the likeliest inheritor of Vonnegut's place in American writing.”
—San Francisco Chronicle

“Mr. Palahniuk doesn't write for tourists. He writes for hard-core devotees drawn to the wild, angry imagination on display and the taboo-busting humor.”
—The New York Times

“Truly unique. He writes at the edge of crazy, and you can feel his desperate urge to get at the truth of things.”
—The Seattle Times

“Twisted? Come on, it's Palahniuk. Impossible to put down? Same answer.”
—Men's Journal

“It's a rare novel that's as funny and as brain-bending as this one. Buckle up.”
—The Philadelphia Inquirer

“A white-knuckled what-if, Rant is the author's most idiosyncratic work to date.”
—The Fort Worth Star-Telegram

“A strong dose of gore and sinewy prose.”
—Time Out New York

“So funny that your facial muscles soon tire.”
—The Guardian