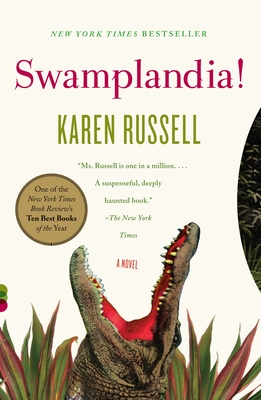 “Located in the Florida Everglades, the Swamplandia island theme park is also home to the Bigtrees, a family of alligator wrestlers. When the mom and star of the show dies, the Bigtree way of life unravels. Dad heads to the mainland to find investors, while his three teenagers are left to deal with their losses. Kiwi attempts to infiltrate a rival amusement park, Ossie falls in love with a ghost, and the story's 13-year-old narrator, Ava, wrestles with a force more fearsome than gators: the loss of innocence. Karen Russell's sentences are so beautiful and original, they will leave you breathless!”
— Michael Keefe, Annie Bloom's Books, Portland, OR

“Located in the Florida Everglades, the Swamplandia island theme park is also home to the Bigtrees, a family of alligator wrestlers. When the mom and star of the show dies, the Bigtree way of life unravels. Dad heads to the mainland to find investors, while his three teenagers are left to deal with their losses. Kiwi attempts to infiltrate a rival amusement park, Ossie falls in love with a ghost, and the story's 13-year-old narrator, Ava, wrestles with a force more fearsome than gators: the loss of innocence. Karen Russell's sentences are so beautiful and original, they will leave you breathless!”
— Michael Keefe, Annie Bloom's Books, Portland, OR

"Ms. Russell is one in a million. . . . A suspensfuly, deeply haunted book."--The New York Times

Thirteen-year-old Ava Bigtree has lived her entire life at Swamplandia!, her family’s island home and gator-wrestling theme park in the Florida Everglades. But when illness fells Ava’s mother, the park’s indomitable headliner, the family is plunged into chaos; her father withdraws, her sister falls in love with a spooky character known as the Dredgeman, and her brilliant big brother, Kiwi, defects to a rival park called The World of Darkness.

As Ava sets out on a mission through the magical swamps to save them all, we are drawn into a lush and bravely imagined debut that takes us to the shimmering edge of reality.

Karen Russell, a native of Miami, won the 2012 National Magazine Award for fiction, and her first novel, Swamplandia! (2011), was a finalist for the Pulitzer Prize. She is a graduate of the Columbia MFA program, a 2011 Guggenheim Fellow, and a 2012 Fellow at the American Academy in Berlin. She lives in Philadelphia.

“[Russell] has thrown the whole circus of her heart onto the page, safety nets be damned. . . . Russell has deep and true talent.” —San Francisco Chronicle

“Vividly worded, exuberant in characterization, the novel is a wild ride. . . . This family, wrestling with their desires and demons . . . will lodge in the memories of anyone lucky enough to read Swamplandia!” —The New York Times Book Review

“The bewitching Swamplandia! is a tremendous achievement.” —Entertainment Weekly

“If no such thing as the Great Floridian Novel already existed, consider it done. . . . A novel of idiosyncratic and eloquent language; hyperreal, Technicolor settings; and larger-than-life characters who are nonetheless heartbreakingly vulnerable and keenly emotional. It’s a tour de force.” —Elle

“Dazzlingly original. . . . Like the state itself, Swamplandia! is a crossroads where the wild and the tame, the spectacular and the mundane meet; underneath the hubbub of the fantastic lies a family of misfits at sea in their grief—theirs is a story that is as ordinary as it is heartbreaking.” —Boston Globe

“A rich and humid world of spirits and dreams, buzzing mosquitoes and prehistoric reptiles, baby-green cocoplums and marsh rabbits, and musty old tomes about heroes and spells. With Ava [Russell] has created a goofy and self-conscious girl who is young enough to hope that all darkness has an answering lightness.” —The Economist

“Swamplandia! flashes brilliantly—holographically—between a surreal tale brimming with sophisticated whimsy and an all-too-realistic portrait of a quaint but dysfunctional family under pressure in a world that threatens to make them obsolete. . . . Ava is a true contemporary heroine and not easily forgotten.” —More

“Audacious, beguiling. . . . Ava’s story turns into a tale that could have been concocted by Flannery O’Connor in partnership with the Brothers Grimm—in other words, a first-class nightmare. . . . You will admire this novel for its prose, but you will love it for its big heart.” —The Daily Beast

“Ava’s juicy, poetic voice, assembled through sheer willpower and joie de vivre and desperation from a self-taught young genius’s love of language, is what carries this book. . . . [A] garish and fierce beauty.” —Salon

“Swamplandia! is both a celebration of the Everglades and an elegy for it. . . . Russell has created a credible, captivating universe.” —The Sun Sentinel

“Think Scout Finch if she’d been raised in an old-school tourist attraction instead of a tiny town. Or Dorothy if a tornado had dropped her in the Everglades instead of Oz. Or Alice if she had tumbled into a Wonderland populated by gators and ghosts and a man in a coat made of feathers. . . . A story rich in fantastic images and gorgeous language, anchored . . . by its wonderfully human characters and its big, warm heart.” —St. Petersburg Times

“Funny, sorrowful, and engrossing. . . . Hardly a page goes by without the reader marveling. . . . An adventure story, a tale of family, a testament to resilience and an account of America’s homogenization, Swamplandia! is an accomplished and affecting debut.” —Richmond Times-Dispatch

“Unlike any story you’re familiar with. . . . A mesmerizing gothic portrait of love, death, and the loss of innocence.” —The Gainesville Times

“Russell’s writing is clear, rhythmic and dependable, even as her imagination runs wild.” —Los Angeles Times

“Some novels pull readers forward with plots that demand resolution; others make them want to linger on each sentence, bathing in the delights. Swamplandia! . . . does both, leaving readers with a sweet dilemma: Appreciate the present or forge on to find out what happens next.” —The Columbus Dispatch

“There’s simply no question that Russell writes beautifully, even about the darkest of truths.” —Time Out Chicago

“May be the best book you’ll ever read about a girl trying to save her family’s alligator-wrestling theme park.” —O, The Oprah Magazine

“[Russell’s] prose dazzles in any medium.” —The Philadelphia Inquirer


“Russell’s prose is beautiful, vivid, and lovingly creepy—just like Florida itself. . . . Magnificent.” —The Stranger (Seattle, WA)

“[A] wonderfully overstuffed, scaldingly funny, and frightening debut. . . . Read this book, pass it on to those who deserve it, and be thankful that the world contains artists like Karen Russell.” —PopMatters.com

“Exuberant, big-hearted, and entertaining. . . . In the midst of making readers think, Russell also makes us laugh, cry and gasp as she concocts an amazing and undiscovered world and populates it with characters we come to care for deeply. You’ll want to savor the sentences in this literary triumph.” —Maclean’s