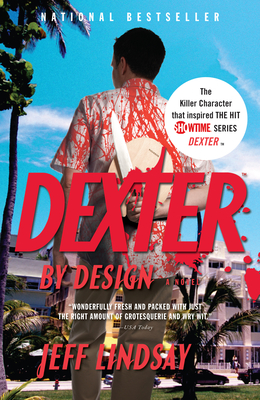 This is book number 4 in the Dexter Series series.

After his surprisingly glorious honeymoon in Paris, life is almost normal for Dexter Morgan. Married life seems to agree with him: he’s devoted to his bride, his stomach is full, and his homicidal hobbies are nicely under control. But old habits die hard—and Dexter’s work as a blood spatter analyst never fails to offer new temptations that appeal to his offbeat sense of justice.  Not to mention that his Dark Passenger still waits to hunt with him in the moonlight.  The discovery of a corpse (artfully displayed as a sunbather relaxing on a Miami beach chair) naturally piques Dexter’s curiosity and Miami’s finest realize they’ve got a terrifying new serial killer on the loose. And Dexter, of course, is back in business.

Jeff Lindsay is the New York Times bestselling author of the Dexter novels, which debuted in 2004 with Darkly Dreaming Dexter. They are the basis of the hit Showtime and CBS series, Dexter. He lives in South Florida with his family.

“Wonderfully fresh and packed with just the right amount of grotesquerie and wry wit.” —USA Today

“An entertaining, funny series. . . . In his own way, Dexter is trying to make the world a better place.” —Sun-Sentinel

“The real appeal of this macabre tour de force is Dexter’s sardonic voice, so snappy and smart, and yet so full of self-loathing that we hate ourselves for laughing.” —The New York Times

“Like a breath of fresh air blowing across all of crime-novel conventions, there is Dexter.” —The Denver Post

“With chills like this, you can skip the air-conditioning.” —Time

“Just when you think (hope?) that the tired and rarely credible device of the serial killer next door has hit a wall, along comes a writer like Jeff Lindsay to prove you wrong. . . . So enjoyable.” —Chicago Tribune

“Dexter is a fascinating character, though he’s not the kind of guy you’d like to invite to dinner.” —Chicago Sun-Times

“In creating a singularly unique killer, Lindsay also manages to create a few sleepless nights for the reader.” —The Anniston Star

“Lindsay gets high marks for originality, atmosphere, vibrant action scenes and having the brass to write this in the first place.” —Tulsa World