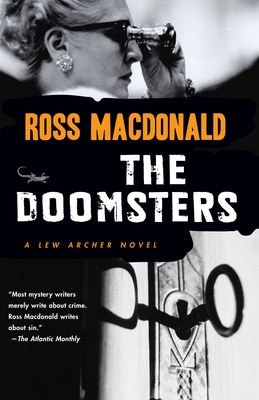 This is book number 7 in the Lew Archer Series series.

Hired by Carl Hallman, the desperate-eyed junkie scion of an obscenely wealthy political dynasty, detective Lew Archer investigates the suspicious deaths of his parents, Senator Hallman and his wife Alicia. Arriving in the sleepy town of Purissima, Archer discovers that orange groves may be where the Hallmans made their mint, but they’ve has been investing heavily in political intimidation and police brutality to shore up their rancid wealth. However, after years of dastardly double-crossing and low down dirty-dealing, the family seem to be on the receiving end of a karmic death-blow. With two dead already and another consigned to the nuthouse, Archer races to crack the secret before another Hallman lands on the slab.Murder, madness and greed grace The Doomsters, where a tony façade masks the rot and corruption within.

Ross Macdonald's real name was Kenneth Millar. Born near San Francisco in 1915 and raised in Ontario, Millar returned to the U.S. as a young man and published his first novel in 1944. He served as the president of the Mystery Writers of America and was awarded their Grand Master Award as well as the Mystery Writers of Great Britain's Gold Dagger Award. He died in 1983.

“Most mystery writers merely write about crime. Ross Macdonald writes about sin.” —The Atlantic Monthly“Ross Macdonald should not be limited in audience to connoisseurs of mystery fiction. He is one of a handful of writers in the genre whose worth and quality surpass the limitations of the form.” —Los Angeles Times“Ross Macdonald is one of the best writers of the whipcord thriller.” —The Bookman