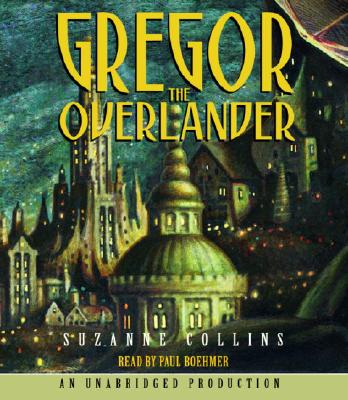 By Suzanne Collins, Paul Boehmer (Read by)
$39.00
Email or call for price.

This is book number 1 in the Underland Chronicles series.

"If Alice's Wonderland had existed under New York City instead of the pristine English countryside, Underland is probably the kind of world she would have found.  After following his little sister through a grate in the basement of his apartment building, Gregor discovers a world that only he can save."

Rich in suspense and brimming with adventure, the New York Times-bestselling Underland Chronicles unfold the fate of the Underland and the great warrior, Gregor. Suzanne Collins is also the author of the bestselling Hunger Games trilogy.
When eleven-year-old Gregor follows his little sister through a grate in the laundry room of their New York apartment, he hurtles into the dark Underland beneath the city. There, humans live uneasily beside giant spiders, bats, cockroaches, and rats--but the fragile peace is about to fall apart.
Gregor wants no part of a conflict between these creepy creatures. He just wants to find his way home. But when he discovers that a strange prophecy foretells a role for him in the Underland's uncertain future, he realizes it might be the only way to solve the biggest mystery of his life. Little does he know his quest will change him and the Underland forever.
Rich in suspense and brimming with adventure, Suzanne Collin's debut marked a thrilling new talent, and introduced a character no young reader will ever forget.

Suzanne Collin's debut novel, Gregor the Overlander, the first book in Underland Chronicles, received wide praise both in the United States and abroad. All three titles in the series are available on audio from Listening Library. Also a writer for children's television, Suzanne lives with her family in Connecticut. From the Audio Download edition.