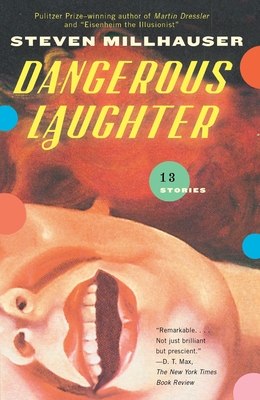 Thirteen darkly comic stories, Dangerous Laughter is a mesmerizing journey that stretches the boundaries of the ordinary world.

Steven Millhauser's first novel, Edwin Mullhouse: The Life and Death of an American Writer, was published in 1972 and several years later received the Prix Médicis Étranger in France. Since then he has published nine works of fiction, among them several collections of stories and novellas, as well as the novel Martin Dressler: The Tale of an American Dreamer, which won the Pulitzer Prize in 1997. He is also a recipient of the Lannan Award and has been honored by the American Academy of Arts and Letters. His story "Eisenheim the Illusionist," from The Barnum Museum, was the basis of the film The Illusionist (2006), starring Edward Norton and Paul Giamatti. Millhauser's work has been translated into fourteen languages. He is a Professor of English at Skidmore College, and lives in Saratoga Springs, New York.

“Remarkable. . . . Not just brilliant but prescient.”

“Readers seeking the perfect introduction to Pulitzer Prize-winning author Steven Millhauser need look no further. . . . Dangerous Laughter draws on every facet of his imagination. . . . It's more akin to music-making than storytelling.”

“Millhauser's best story collection. . . . Every reader knows of writers who are like secrets one wants to keep yet whose books one wants to tell the world about. Steven Millhauser is mine.”

“Enchanting. . . . Steven Millhauser is a marvel.”

“Beautiful and profound. . . . Millhauser's work is among the most thought-provoking I've ever encountered.”

“Tales fueled by curiosity and wonder, from a master . . . [who] is consistently so much fun to read . . . Everything one has come to want and expect in Millhauser’s fiction is here–spooky attics, fantastic inventions, artists driven mad, and ambitious enterprises that become overattenuated and impossible to sustain. The result is almost a Steven Millhauser primer, a much needed fix for fans . . . and a perfect introduction for those unacquainted with his writing. . . . [‘A Precursor to the Cinema’ and ‘The Wizard of West Orange’ are] marvelous stories that make the suspension of disbelief feel like no work whatsoever . . . Millhauser has done nothing here to diminish his reputation as one of our most dazzling storytellers. ‘It was said that no matter how closely you examined one of the Master’s little pieces, you always discovered some further wonder,’ he writes of his obsessive court miniaturist [in ‘In the Reign of Harad IV’]. The same could be said of Steven Millhauser.”

“Reviewers use words like enchantment recklessly, as though it happens to us all the time. Book reviewers are especially prone to describing books as ‘enchanting,’ pretending that a spell has actually been cast over us. If only it were so. As often as not, it is a spell of boredom. Steven Millhauser’s books are the exception. . . .

[‘Cat ‘n’ Mouse’] sounds like a ‘Tom and Jerry’ cartoon as written by Franz Kafka. Or Sigmund Freud. . . .[It is] indelibly vivid . . . hard-edged and bright as a plasma screen . . . In ‘The Disappearance of Elaine Coleman,’ a young woman disappears from inside her apartment without a trace. . . . Millhauser turns an ordinary whodunit into a tale of obscure people who slowly disappear out of apparent volition. . . . There is no more poignant note in Millhauser than this: the sense of life that has come to nothing, as we understand that Elaine Coleman has committed a metaphysical form of suicide: willing herself out of existence because in the eyes of others she has already been erased. In the most haunted story of them all, ‘The Room in the Attic,’ Millhauser introduces us to a high school boy whose friend’s sister, Isabel, lives in an attic shut off completely from light. . . .There are few writers in America better at striking the note of longing, of missed opportunity, of life taking uncanny and unfathomable turns. The utter weirdness of the young man in a pitch black room, held rapt and immobile by the lure of an unseen and teasing young woman is the very essence of estrangement itself. Millhauser is the maestro of the creepy. In reading [Dangerous Laughter] the reader experiences what Millhauser himself must feel as he writes these Kafkaesque stories of real mystery in imaginary suburbs.”

“A sense of mystery and strangeness pervades these 13 stories . . . Millhauser’s intelligence and originality shine through on every page. Recommended.”

“Exhilarating . . . [Millhauser] has taken strange, magical ideas and crystallized stories around them. . . . He takes abstractions and fleshes them out, without ever losing sight of their wonder, or of the inherent humor of human desire. He’s like Borges, but funny. And while there aren’t really characters, in the sense of people with feeling and motives (other than obsession), you come to know these outlandish ideas like old friends. Millhauser explores every nook and cranny of the strange, and shows us what it might be like to live in a world where we pushed just a little further–or rather, much, much further–into the realm of the mysterious and unknown. . . . Dangerously good.”

“Imaginative . . . masterful. [Dangerous Laughter] opens with a story about Tom and Jerry–that’s right, cartoon characters. But it doesn't resort to easy pop-cultural winking at the reader. Instead, Millhauser portrays this manic animated world with precise, flat descriptions that are more akin to Chekhov than Loony Tunes. It’s a risky opener, but what could have been cutesy nostalgia turns out to be a tale of concentrated dread. . . . As fantastical as each of [Millhauser’s] stories may be, they never seem more than a notch away from reality. . . . Five stars.”

“Excellent . . . a substantial treat. Millhauser may criticize the pleasures of escapism in his fiction, but he provides them himself. . . . He takes the institutions of fun–parks, pleasure domes, fun houses–as his subject matter, [and] describes just what it feels like to enter these magic kingdoms . . . capturing the very feeling of childhood innocence. The title story imagines laughter that is literally dangerous–a teen cult of extreme, hour-long laughter grips a suburban community for one summer–and thereby brings the idea of danger back to the point where fantasy takes control. That moment of release guides almost all of his plots. It is true that one character, a previously quiet girl who becomes queen of the uninhibited laugh, actually dies. But the sense of danger upon which the story balances is that of midsummer restlessness–of initiation. The danger is, in a word, sweet . . . ‘In the Reign of Harad IV’ deserves special mention: It concerns a man of ambition who is not a master builder, but an artist. He has been working for years on a miniature version of King Harad’s palace, but his taste for the nearly invisible leads him to create objects so deliciously tiny that they actually are invisible–and thus his fame and fortune ends.”

“Entrancing . . . Millhauser’s stories of obsession and paranoia explore the bewitching, undefined space between perception and reality, evoking a disquieting supernatural realm that threatens to disrupt the everyday.”

“There is a ferocious restlessness in Steven Millhauser’s stories, a mingling of desire and dread. Among the showpieces in his mesmerizing new collection, Dangerous Laughter: ‘Cat ’n’ Mouse,’ which amazingly puts into words the familiar cartoon to bare the existential angst behind the familiar slapstick, and ‘A Change in Fashion,’ a tale of sartorial design gone mad that makes the emperor’s new clothes look uninspired.”

“Excellent . . . beautiful. Millhauser is a writer of high degree, and he definitely knows his way around a sentence. . . . My favorite of the thirteen [stories] is “The Room in the Attic,” a story of a high school boy who visits a mysterious girl in a pitch black room. . . . It’s a riveting read, and the conclusion took me by surprise. It’s not difficult to recommend Dangerous Laughter . . . If you’re looking for a quick read [with] substance, give it a shot.”

“Fantastical fashions, pastimes, and pursuits consume whole communities, only to disappoint them (or worse) in Millhauser’s newest collection of stories. Dresses balloon to the size of houses (and women slip out from under them unnoticed). A Babel-like tower finally reaches heaven, only to lose its mystique. Best, there is the pseudoerotic game in which friends stimulate each other to paroxysms of laughter . . . This is classic Millhauser, and it won’t disappoint newcomers or longtime fans.”

“Only Millhauser could pull off a story modeled after a Tom and Jerry—like cat-and-mouse cartoon; no one else is as attuned to the poetry hidden under pop detritus, or as capable of bringing it to light. . . . 13 deadpan fantasies featuring alternate histories, otherworldly architecture, and teenagers at (deadly) play.”

“A collection of gossamer yet substantial entertainments from the ineffably graceful stylist well on his way to becoming America’s Borges (or, perhaps, Cortázar). If that seems paradoxical, so does Millhauser, who has spent decades perfecting a minimalist art that nevertheless encompasses the history of our culture, its predecessors and its oppressors. . . . Marvels within marvels, from a writer whose prose possesses the equivalent of what musicians call perfect pitch.”

“[A] gem . . . comes from Mr. Millhauser with ‘The Room in the Attic.’ In this haunting tale [from his collection Dangerous Laughter, due in February], a teenager befriends a classmate’s sister, who has recently suffered a nervous breakdown and remains sequestered in a darkened attic room. . . . The two teenagers engage in innocent games in the dark that slowly evolve into electric scenes of tender foreplay. [Millhauser] conjures a convincingly dreamlike world, highly charged with desire and suspense, yet the characters barely touch or see one another. . . . Masterly storytelling.”

“Phenomenal clarity and rapacious movement are only two of the virtues of Millhauser’s new collection, which focuses on the misery wrought by misdirected human desire and ambition. . . . Millhauser’s stories draw us in all the more powerfully, extending his peculiar domain further than ever.”

“Millhauser is one of our most inventive writers. . . . The curious opening story in his new collection, which sets the stage for further hilarious and creative delights in stories to come, is titled ‘Cat ’n’ Mouse,’ which puts into narrative form a typical cartoon struggle between two archenemies, à la Tom and Jerry . . . Demonstrating equal ingenuity is the three-part ‘Room in the Attic,’ an enigmatic, surreal piece about a boy’s obsession with his friend’s sister; the fairy-tale like parable ‘In the Reign of Harad IV,’ and the sly social satire, ‘Here at the Historical Society’ . . . Thirteen stories are gathered here–an unlucky number? Certainly not for the reader.”