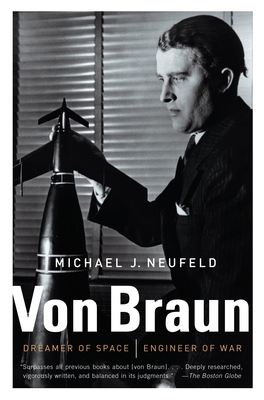 Chief rocket engineer of the Third Reich and one of the fathers of the U.S. space program, Wernher von Braun is a source of consistent fascination. Glorified as a visionary and vilified as a war criminal, he was a man of profound moral complexities, whose intelligence and charisma were coupled with an enormous and, some would say, blinding ambition. Based on new sources, Neufeld's biography delivers a meticulously researched and authoritative portrait of the creator of the V-2 rocket and his times, detailing how he was a man caught between morality and progress, between his dreams of the heavens and the earthbound realities of his life.

Michael Neufeld is the museum curator in the Space History Division of The Smithsonian National Air and Space Museum. He was educated at the University of Calgary and The Johns Hopkins University, where he received his doctorate in history. His book The Rocket and the Reich: Peenemunde and the Coming of the Ballistic Missile Era was published by The Free Press in 1995 and was awarded the AIAA History Manuscript Award and the SHOT Dexter Prize. He lives in Maryland.