The Fractalist: Memoir of a Scientific Maverick (Paperback) 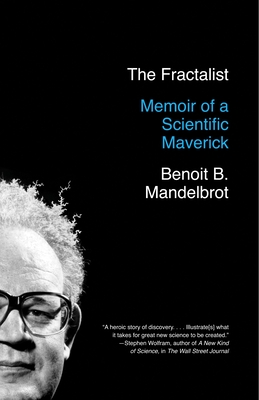 Here is the remarkable life story of Benoit Mandelbrot, the creator of fractal geometry, and his unparalleled contributions to science mathematics, the financial world, and the arts. Mandelbrot recounts his early years in Warsaw and in Paris, where he was mentored by an eminent mathematician uncle, through his days evading the Nazis in occupied France, to his education at Caltech, Princeton, and MIT, and his illustrious career at the IBM Thomas J. Watson Research Center. An outside to mainstream scientific research, he managed to do what others had thought impossible: develop a new geometry that combines revelatory beauty with a radical way of unfolding formerly hidden scientific laws. In the process he was able to use geometry to solve fresh, real-world problems.

With exuberance and an eloquent fluency, Benoit Mandelbrot recounts the high points of his fascinating life, offering us a glimpse into the evolution of his extraordinary mind.

With full-color inserts and black-and-white photographs throughout.

A graduate of the École Polytechnique, Benoit Mandelbrot obtained his doctorate from the University of Paris and spent more than thirty-five years at IBM as a research scientist. Best known as the father of fractal geometry, he transformed our understanding of information theory, economics, fluid turbulence, nonlinear dynamics, and geophysics. He died in 2010.

“A heroic story of discovery. . . . Illustrate[s] what it takes for great new science to be created.” —Stephen Wolfram, The Wall Street Journal

“Mandelbrot had the kind of beautiful, buzzing mind that made even gifted fellow scientists feel shabby around the edges. . . . The Fractalist evokes the kinds of deceptively simple questions Mandelbrot asked . . . and the profound answers he supplied.” —The New York Times

“Fascinating and engaging . . . A compelling look at one of the greatest multidisciplinary thinkers of the 21st century.” —Wired.com

“Mandelbrot was a spell-worker who saw connections no one else did and united apparently disparate phenomena. The mathematics of fractals—and pictures of the Mandelbrot set—offered many budding mathematicians their first taste of ‘real’ mathematics, in all its beauty, utility and sheer unexpectedness.” —The Economist

“The delight Mandelbrot took in roughness, brokenness, and complexity, in forms that earlier mathematicians had regarded as ‘monstrous’ or ‘pathological,’ has a distinctly modern flavor. Indeed, with their intricate patterns that recur endlessly on ever tinier scales, Mandelbrot’s fractals call to mind the definition of beauty offered by Baudelaire: C’est l’infini dans le fini.” —New York Review of Books

“If you love fractals, you will love this memoir. . . . Mandelbrot describes his life and times with both introspection and humor.” —New York Journal of Books

“Charmingly written . . . The memoir of a brilliant mathematician who never thought of himself as a mathematician.” —Kirkus Reviews

“Captures the enthusiasm as well as the memories of a visionary who loved nothing better than studying complex multidisciplinary concepts.” —Publishers Weekly

“[Mandelbrot’s] work has spread and impacted so many fields that there’s nobody in the world who is broad enough to appreciate the full impact. . . . [His] mix of gall and genius gave him license to ask the questions no one else did.” —Thomas Theis, director of physical sciences at IBM Research

“Mandelbrot brings us back to the sense of the wonder of things, without giving up the logic.” —John Briggs, author of Fractals: The Patterns of Chaos

“When we talk about the impact inside mathematics, and applications in the sciences, [Mandelbrot] is one of the most important figures of the last 50 years.” —Heinz-Otto Peitgen, professor of mathematics and biomedical sciences at the University of Bremen