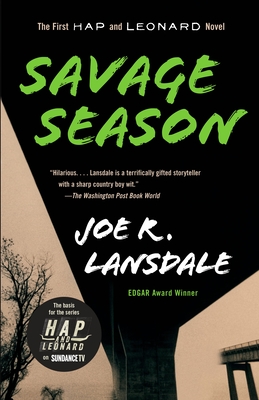 This is book number 1 in the Hap and Leonard Series series.

Hap Collins and Leonard Pine are best friends, yet they couldn't be more different. Hap is an east Texas white-boy with a weakness for Texas women. Leonard is a gay, black Vietnam vet. Together, they steer up more commotion than a fire storm. But that's just the way they like it. So when an ex-flame of Hap's returns promising a huge score. Hap lets Leonard in on the scam, and that's when things get interesting. Chockfull of action and laughs, Savage Season is the masterpiece of dark suspense that introduced Hap and Leonard to the thriller scene. It hasn't been the same since.

"Hilarious. . . . Lansdale is a terrifically gifted storyteller with a sharp country boy wit."—The Washington Post Book World"For sheer pace, humor, and style, the winner is Savage Season."—Time Out New York“The most consistently original and originally visceral writer the great state of Texas (or any other state for that matter) has seen in a score of flashpoint summers.”—Austin Chronicle “Lansdale has an unsettling sensibility. Be thankful he crafts such wild tall tales.”—Chicago Sun-Times