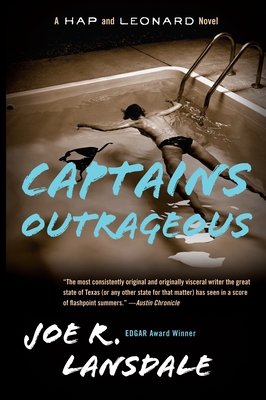 This is book number 5 in the Hap and Leonard Series series.

Hap Collins and Leonard Pine find mucho trouble, this time in Mexico, when they come face to face with a nudist mobster, his seven-foot strong-arm, a octogenarian knife-touting fisherman, and, somehow, an armadillo.

When Hap Collins saves the life of his employer's daughter, he is rewarded with a Caribbean Cruise, and he convinces his best friend Leonard Pine to come along. However, when the cruise sails on without them, stranding them in Playa del Carmen with nothing but their misfortune and Leonard's new ridiculous hat, the two quickly find themselves drawn into a vicious web of sordid violence. When they return to East Texas, they find that trouble has beaten them back, and when trouble's around it doesn't take long for Hap and Leonard to find it.

"The most consistently original and originally visceral writer the great state of Texas (or any other state for that matter) has seen in a score of flashpoint summers."—Austin Chronicle

"Lansdale gets better with each book."—Rocky Mountain News

"A storyteller in the great American tradition of Ambrose Bierce and Mark Twain."--The Boston Globe "Lansdale reaches the reader on a gut level. . . . A terrific writer."--Ellery Queen's Mystery Magazine "Lansdale is a storyteller in the Texas tradition of outrageousness . . . but amped up to about 100,000 watts."—Houston Chronicle  "One of publishing's best kept secrets."--Dallas Morning News "Hap and Leonard function as a sort of Holmes and Watson -- if Holmes and Watson had had more lusty appetites and less refined educations and spent their lives in east Texas. . . . Not only funny, but also slyly offer acute commentary on matters of race, friendship and love in small-town America."—The New York Times   "Lansdale has a zest for storytelling and a gimlet eye for detail."—Entertainment Weekly "As funny as all get out."—Ft. Lauderdale Sun-Sentinel