Dark Invasion: The Secret War Against the Kaiser's Spies (Hardcover) 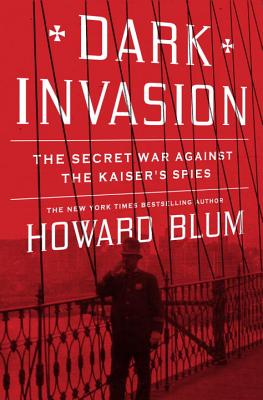 From bestselling author Howard Blum comes a remarkable true story of a pivotal moment in American history when the nation’s first counterterrorism unit waged a secret war to stop a stealth army of German spies and saboteurs.
In the early days of World War I, the German high command is outraged that supposedly "neutral" America is aggressively trading with the Allies, giving them a critical advantage in weapons and supplies. Desperate to disrupt the surreptitious support without pushing the United States into the conflict, German spymasters hatch a secret campaign of terrorism and sabotage on US soil.
Among the conspirators are an expert on germ warfare, a murderous Harvard professor, and a debonair German officer turned master spy. Their targets are ships, factories, livestock, and even captains of the military-industrial complex such as J. P. Morgan. Their tools are murder, assassination, bombs, and a germ warfare campaign instigated from a clandestine laboratory six miles from the White House. And their schemes include sabotaging American munitions factories and supply depots, planting bombs on, bombing the Capitol Building, and spreading deadly toxins.
For Police Inspector Tom Tunney, a former NYPD bomb squad expert tasked with rooting out the spies, the immense challenge dwarf those that will be faced by his terror-fighting successors decades later. The Kaiser's spies are well-trained, well-funded, and inventive. Plus, they have the assistance of many of the nearly eight million German-Americans - a potential army of moles and fellow saboteurs.
As Tunney enters the deep labyrinth of deception that the Germans have created, he begins to realize that the scope of the terrorists' plan is far greater than anyone suspected.  At stake is not only the fate of America’s allies, but America itself.
At once an edge-of-the-seat spy thriller and an illuminating portrait of a unit that was, in effect, America’s first department of homeland security, Dark Invasion is a tour de force of narrative history.

HOWARD BLUM is the Edgar Award-winning author of ten previous critically acclaimed non-fiction bestsellers. Formerly an award-winning "New York Times" reporter, he is now a Contributing Editor of "Vanity Fair." The father of three, he makes his home on a hilltop in Connecticut. DARK INVASION will be made into a feature film by Warner Bros., with Bradley Cooper starring as New York Police Captain Tom Tunney.

“Dark Invasion is must read for lovers of suspense and anyone who wants to understand how the basis of our homeland security system was born. Between 1914 and 1917, a clandestine network of German terrorists orchestrated a campaign of mass destruction and murder on American soil that has never been equaled.  The network was made up of brilliant scientists, suave diplomats, and military and civilian operatives at the highest and lowest levels. The one requirement imposed on its members was a willingness to murder Americans on whatever scale necessary, by whatever means necessary. Opposing this juggernaut was Captain Tom Tunney, head of the NYPD’s Bomb Squad, who in the process of working with his crack team of operatives would wind up creating the basis of America’s Homeland Security System nearly a century before 9/11. Expertly told by Howard Blum with shocking betrayals, surprising heroism, artful cons, and heart-in the-throat chases, Dark Invasion grippingly brings to life two sets of equally fascinating antagonists – cops and terrorists – as they contend over a nation’s fate.
--Tom Reiss, New York Times bestselling author of The Black Count and The Orientals


“A suspense-filled tale, Dark Invasion uncovers a fascinating corner of history when courageous New York City police officers fought insurmountable odds to defend America against sophisticated German saboteurs at the start of World War I.”
—Ronald Kessler, author of The Secrets of the FBI and In the President’s Secret Service

“In his gripping and expertly crafted narrative, Blum demonstrates that the best stories are true.  Told in the great tradition of spy thrillers, Dark Invasion is the startling tale of German secret agents operating in the United States during World War I and the determined effort of a New York detective to stop them.  The result is a book that is not only engrossing, but helps explain why America entered the Great War.”
--Scott Miller, author of The President and the Assassin: McKinley, Terror, and Empire at the Dawn of the American Century

"I read Dark Invasion without stopping. It is a well-researched and exceedingly well-written account of a pre-World War I series of terroristic attacks on the United States, in this case perpetrated by Germans.  It is full of good stories and characters."
--Norman Stone, award-winning author of The Eastern Front: 1914-1917 and World War One: A Short History