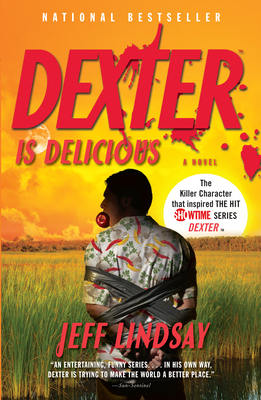 This is book number 5 in the Dexter Series series.

NATIONAL BESTSELLER • Dexter Morgan’s neatly organized life as a blood spatter analyst for the Miami Police, devoted husband and father, and killer of only those who deserve it is turned upside down by the arrival of his new daughter, Lily Anne. • The Killer Character That Inspired the Hit Showtime Series Dexter

Feeling surprisingly sunny and loving, he’s trying to suppress the influence of his Dark Passenger—the voice inside who guides his homicidal urges.  But Dexter is summoned to investigate the disappearance of a seventeen-year-old girl who has been running with a bizarre group of goths who fancy themselves to be vampires. As Dexter gets closer to the truth of what happened to the missing girl, he realizes they are not really vampires, but cannibals.  And most disturbing,  these people have their eyes on Dexter ... and their mouths are watering.

Jeff Lindsay is the New York Times bestselling author of Darkly Dreaming Dexter, Dearly Devoted Dexter, Dexter in the Dark and Dexter by Design. His novels are the basis of the hit Showtime and CBS series, Dexter. He lives in South Florida with his family.

“Lindsay’s original, cockeyed view of the world is alive and well. . . . [His] dark, comedic fiction is an alternate universe once removed.” —Los Angeles Times

“A fresh, inventive slice of crime fiction that turns the axis of good and evil . . . upside down. A psychological thriller in the best sense of the genre.” —Sun-Sentinel

“Like a breath of fresh air blowing across all of crime-novel conventions, there is Dexter.” —The Denver Post

“With chills like this, you can skip the air-conditioning.” —Time

“Just when you think (hope?) that the tired and rarely credible device of the serial killer next door has hit a wall, along comes a writer like Jeff Lindsay to prove you wrong. . . . So enjoyable.” —Chicago Tribune

“Wonderfully fresh and packed with just the right amount of grotesquerie and wry wit.” —USA Today

“The real appeal of this macabre tour de force is Dexter’s sardonic voice, so snappy and smart, and yet so full of self-loathing that we hate ourselves for laughing.” —The New York Times

“Dexter is a fascinating character, though he’s not the kind of guy you’d like to invite to dinner.” —Chicago Sun-Times

“Lindsay gets high marks for originality, atmosphere, vibrant action scenes and having the brass to write this in the first place.” —Tulsa World