Apocalyptic Planet: Field Guide to the Future of the Earth (Paperback) 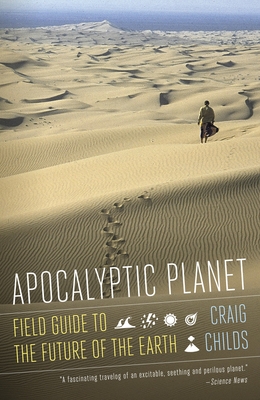 Ours is not a stable planet. It is prone to sudden, violent natural disasters and extremes of climate. In this exhilarating exploration of our globe, Craig Childs goes to where the apocalypse can be seen now. From the driest deserts of Chile, through the genetic wasteland of central Iowa, to the site of the drowned land bridge of the Bering Sea, he uncovers cataclysms that tell us what could be next: forthcoming ice ages, super volcanoes, and the conclusion of planetary life cycles. Childs delivers a sensual feast in his descriptions of the natural world, and undeniable science that reveals both the earth’s strengths and frailties. Bearing witness to the planet’s sweeping and perilous changes, he shows how we can alter the future, and how the world will live on, though humans may not survive to see it.

Craig Childs is a commentator for NPR’s Morning Edition, and his work has appeared in The New York Times, Los Angeles Times, Men’s Journal, Outside, The Sun, and Orion. He has won numerous awards including the 2011 Ellen Meloy Desert Writers Award, 2008 Rowell Award for the Art of Adventure, the 2007 Sigurd Olson Nature Writing Award, and the 2003 Spirit of the West Award for his body of work.

“A fascinating travelog of an excitable, seething and perilous planet where catastrophes are frequent. . . . In chapters packed with vivid descriptions and lyrical language, Childs tells tales not merely of droughts and ice ages, but of globe-swallowing deserts and planet-freezing cold spells. . . . [A] thoroughly enjoyable book.”
—Science News

“Fantastic. . . . Childs’ new book is like no other you’ll ever read about the ‘end of the world.’. . . [Apocalyptic Planet] pulls off the near impossible, placating our concerns about the end of life as we know it—which won’t be nearly as dramatic as we think, turns out—while also rousing us from complacent slumber.”
—The Salt Lake Tribune

“Apocalyptic Planet is a planet-smashing success in its ability to annihilate your cozy notions of stability.”
—Bookotron

“[Childs] is the best science writer I’ve come across in years, capable of not just capturing an image but doing it in a way that stays with you long afterward. . . . Engrossing. . . . Childs is the central character in his story, and his observations provide entertaining context for the calamities he contemplates across the globe.”
—Juliet Eilperin, The Washington Post

“Apocalyptic Planet is transformative but never boring. Craig Childs takes us places we’d never go in our right minds. But afterward, we will never again regard our spaceship Earth in the same parochial light . . . he paints compelling pictures of what has happened in the past to destroy civilizations and life on land and sea. Then he forecasts what might occur in the future. Besides recounting his expeditions including a perilous, heart-pounding run down a swollen Tibetan river, Childs leavens his captivating chronicle with impish humor, scientific opinions, eco-studies, statistics and facts.”
—Austin American Statesman

“A rip-roaring, gorgeously written look at the deep nature of the death of the planet by ice, fire, heat, species extinction—and these are just some of the ends that have already come to pass. Part travelogue, part thought-experiment, [and] a good dose of craziness with regards to going into very dangerous places without preparation.”
—Bookotron

“Apocalyptic Planet [is] quite a trip.”
—Robert Krulwich, NPR

“Apocalyptic Planet deals with a kind of brutal truth that is almost never talked about, in politics, culture or even much in science—that the Earth’s history is a story of huge, violent natural disasters and extremes in climactic conditions, and that there’s no reason to believe that the future will be any different.”
—Santa Cruz Sentinel

“Childs’s work has a way of elevating and astounding his listeners. . . . His writing is at once sensual and scientific.”
—Telluride Inside podcast

“Scientific, yet personal and passionate, Apocalyptic Planet will excite readers. . . . An illuminating look at several possible scenarios for the end of the world as we know it.”
—Shelf Awareness

“Apocalyptic Planet looks at our ever-changing world to find refreshing and eye-popping insights in the most unlikely places. . . . Craig Childs walking on the desert or climbing a mountain is like a gourmand at a sumptuous feast: the sensual delight with which he relishes the world around him gives the rest of us a vicarious thrill, even hunger. You just want to turn over that rock he sees, move dust to expose an ancient artifact, or scale the cave wall in front of him. Childs delights in the details of the rock, sand, and ice, and in them he finds stories as large as the planet itself. In his hands, the main casualty of apocalypse is our familiar view of Earth: it is impossible to read Craig Childs and see the world in the same way again.”
—Neil Shubin, author of Your Inner Fish

“Childs blends climate science, natural history, literary references, and personal reflections to create an immensely evocative sense of time and place . . . an engaging exploration of the land beneath us . . . intriguing.”
—Booklist

“Craig Childs takes an Edward Abbey-esque journey across our rapidly changing globe. Apocalyptic Planet is lyrical, informative, and full of surprises.”
—Elizabeth Kolbert, author of Field Notes from a Catastrophe

“An elegant and absorbing account of just how violently the earth can change—this is a very good book to read as we start to watch global warming provide a new shock on this scale.”
—Bill McKibben, author Eaarth: Making a Life on a Tough New Planet