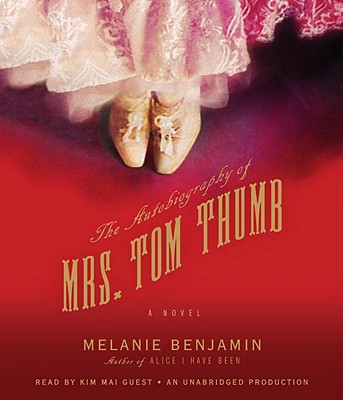 By Melanie Benjamin, Kim Mai Guest (Read by)
$40.00
Not available to order.

In her national bestseller "Alice I Have Been," Melanie Benjamin imagined the life of the woman who inspired "Alice in Wonderland." Now, in this jubilant new novel, Benjamin shines a dazzling spotlight on another fascinating female figure whose story has never fully been told: a woman who became a nineteenth century icon and inspiration and whose most daunting limitation became her greatest strength.
" Never would I allow my size to define me. Instead, I would define it.
"
She was only two-foot eight-inches tall, but her legend reaches out to us more than a century later. As a child, Mercy Lavinia Vinnie Bump was encouraged to live a life hidden away from the public. Instead, she reached out to the immortal impresario P. T. Barnum, married the tiny superstar General Tom Thumb in the wedding of the century, and transformed into the world's most unexpected celebrity.
Here, in Vinnie's singular and spirited voice, is her amazing adventure from a showboat freak revue where she endured jeering mobs to her fateful meeting with the two men who would change her life: P. T. Barnum and Charles Stratton, AKA Tom Thumb. Their wedding would captivate the nation, preempt coverage of the Civil War, and usher them into the White House and the company of presidents and queens. But Vinnie's fame would also endanger the person she prized most: her similarly-sized sister, Minnie, a gentle soul unable to escape the glare of Vinnie's spotlight.
A barnstorming novel of the Gilded Age, and of a woman's public triumphs and personal tragedies, The Autobiography of Mrs. Tom Thumb is the irresistible epic of a heroine who conquered the country with a heart as big as her dreams and whose story will surely win over yours.

Melanie Benjamin is a pseudonym for Melanie Hauser, the author of two contemporary novels. Her first work of historical fiction as Melanie Benjamin was "Alice I Have Been." She lives in Chicago, where she is at work on her next historical novel. "From the Hardcover edition."

Advance praise for The Autobiography of Mrs. Tom Thumb

“Benjamin handles the era of mid-nineteenth-century America like a native, telling a walloping good story about a tiny person with the soul of a giant. The lovely Lavinia Bump once again comes alive, and we’re all the richer because of it.”—Ellen Bryson, author of The Transformation of Bartholomew Fortuno

“Vinnie Bump is one of the most engaging characters to come along in a while. Nineteenth-century women had few options; Vinnie had fewer yet. Melanie Benjamin renders her deeply human in a no-nonsense Olive Kitteridge sort of way. Readers will not soon forget her. I know I won’t.”—Johanna Moran, author of The Wives of Henry Oades

“Lavinia Warren was only thirty-two inches tall, but in Melanie Benjamin’s The Autobiography of Mrs. Tom Thumb she soars above the tumult of Gilded Age America. Benjamin makes her a woman of courage and refinement with an itch for adventure and ambitions that far outstrip her size. I enjoyed every minute I spent with Vinnie in this exuberant, absorbing, elegantly written novel.”—Carol Wallace, author of Leaving Van Gogh

“By turns heart-rending and thrilling, this big-hearted book recounts a fictionalized life of this most extraordinary of women in prose that is lush and details that are meticulously researched. I loved this book.”—Sara Gruen, New York Times bestselling author of Ape House and Water for Elephants

“Melanie Benjamin’s striking novel about the diminutive Lavinia Warren Bump, one of P. T. Barnum’s ‘oddities,’ shows that love and desire, strength and ambition, come in all sizes. Mrs. Tom Thumb brings out the humanity in all of us.”—Sandra Dallas, New York Times bestselling author of The Bride’s Home and Whiter Than Snow

“Melanie Benjamin has created a compelling heroine, whose dramatic and poignant story will capture the reader’s heart to the last page.”—Stephanie Cowell, author of Claude & Camille: A Novel of Monet and Marrying Mozart