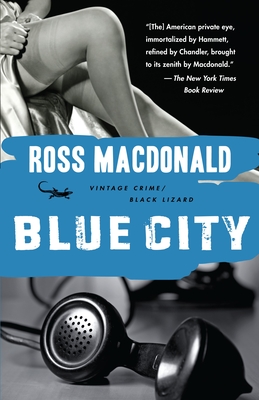 He was a son who hadn’t known his father very well.  It was a town shaken by a grisly murder—his father’s murder.  Johnny Weatherly was home from a war and wandering.  When he found out that his father had been assassinated on a street corner and that his father’s seductive young wife had inherited a fortune, he started knocking on doors.  The doors came open, and Johnny stepped into a world of gamblers, whores, drug-dealers, and blackmailers, a place in which his father had once moved freely.  Now Johnny Weatherly was going to solve this murder—by pitting his rage, his courage, and his lost illusions against the brutal underworld that has overtaken his hometown.

Ross Macdonald’s real name was Kenneth Millar.  Born near San Francisco in 1915 and raised in Ontario, Millar returned to the U.S. as a young man and published his first novel in 1944. He served as the president of the Mystery Writers of America and was awarded their Grand Master Award as well as the Mystery Writers of Great Britain's Gold Dagger Award.  He died in 1983.

“Macdonald should not be limited in audience to connoisseurs of mystery fiction.  He is one of a handful of writers in the genre whose worth and quality surpass the limitations of the form.” —Los Angeles Times

“Without in the least abating my admiration for Dashiell Hammett and Raymond Chandler, I should like to venture the heretical suggestion that Ross Macdonald is a better novelist than either of them.” —Anthony Boucher

“[Macdonald] carried form and style about as far as they would go, writing classic family tragedies in the guise of private detective mysteries.” —The Guardian (London)

“[Ross Macdonald] gives to the detective story that accent of class that the late Raymond Chandler did.” —Chicago Tribune