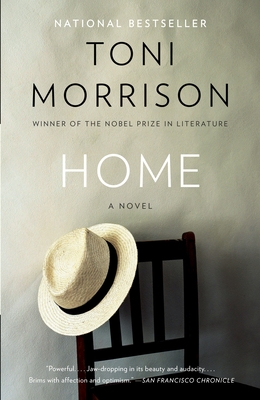 NATIONAL BESTSELLER • A New York Times Notable Book • From the acclaimed Nobel Prize winner: an emotional powerhouse of a novel about a modern Odysseus returning to a 1950s America mined with lethal pitfalls for an unwary Black man

When Frank Money joined the army to escape his too-small world, he left behind his cherished and fragile little sister, Cee. After the war, he journeys to his native Georgia with a renewed sense of purpose in search of his sister, but it becomes clear that their troubles began well before their wartime separation. Together, they return to their rural hometown of Lotus, where buried secrets are unearthed and where Frank learns at last what it means to be a man, what it takes to heal, and—above all—what it means to come home.

Toni Morrison is the author of eleven novels, from The Bluest Eye (1970) to God Help the Child (2015). She received the National Book Critics Circle Award, the Pulitzer Prize, and in 1993 she was awarded the Nobel Prize in Literature. She died in 2019.

"Haunting . . . [Morrison] maps the day-to-day lives of her characters with lyrical precision. . . . Home encapsulates all the themes that have fueled her fiction, from the early novels Sula and The Bluest Eye, through her dazzling masterwork, Beloved." —Michiko Kakutani, The New York Times

"Gorgeous and intense, brutal yet heartwarming. . . . Accessible, tightly composed and visceral as anything Morrison has yet written. . . . [A] devastating, deeply humane--and ever-relevant--book." —Heller McAlpin, NPR

"Luminescent. . . . There is no novelist alive who has captured the beauty and democracy of the American vernacular so well." —The Boston Globe

"Powerful. . . . Jaw-dropping in its beauty and audacity. . . . Brims with affection and optimism." —San Francisco Chronicle

“This scarily quiet tale packs all the thundering themes Morrison has explored before. She’s never been more concise, though, and that restraint demonstrates the full range of her power. . . . A daringly hopeful story about the possibility of healing — or at least surviving in a shadow of peace.” —Ron Charles, The Washington Post

“A fertile narrative imbued with and embellished by Morrison’s visionary scope and poetic majesty.” —Elle

“A bona fide literary event . . . an emotional powerhouse. . . . Told in the stark, economical tone of a short story, with all the philosophical heft of a novel.” —Entertainment Weekly

“A short, swift, and luminescent book. . . . A remarkable thing: proof that Toni Morrison is at once America’s most deliberate and flexible writer. She has almost entirely retooled her style to tell a story that demands speed, brevity, the treat of a looming curtain call. . . . There is no novelist alive who has captured the beauty and democracy of the American vernacular so well.” —The Boston Globe

“Profound . . . Morrison's portrayal of Frank is vivid and intimate, her portraits of the women in his life equally masterful. Its brevity, stark prose, and small cast of characters notwithstanding, this story of a man struggling to reclaim his roots and his manhood is enormously powerful." —O, The Oprah Magazine

“Perhaps Morrison’s most lyrical performance to date. . . . Home has a sparer, faster pace than earlier Morrison novels like Beloved or Jazz, as though a drumbeat is steadily intensifying in the background and the storyteller has to keep up.” —The New York Review of Books

“In a mere 145 pages, Morrison has created a richly textured, deeply felt novel. “Home” has a sense of the real with a touch of magic. After 10 novels and a Nobel prize, Toni Morrison certainly isn’t resting on her laurels.” —Louisville Courier-Journal

“Her themes—identity, community, the resoluteness of both good and evil—are epic, and her language uniquely her own. . . . Taut and muscular, Home wastes not a word. . . . In sentences balanced like proverbs, the Nobel Prize winner conjures up the community of country women Frank asks to help save Cee.” —The Plain Dealer

“In this slim, scathing novel, Morrison brings us another quintessentially American character struggling through another shameful moment in our nation’s history. . . . Home is as much prose poem as long-form fiction—a triumph for a beloved literary icon who proves that her talents remain in full flower. Four stars.” —People

“A short, urgent novel, polished to the essential themes that the Nobel Prize-winning author has explored for decades.” —The Columbus Dispatch

“Beautifully wrought . . . [Home] packs considerable power, because the Nobel Prize-winning author is still writing unflinchingly about the most painful human experiences. There’s nothing small about the story she’s told with such grace in these pages.” —The Oregonian