Roosevelt and Stalin: Portrait of a Partnership (Paperback) 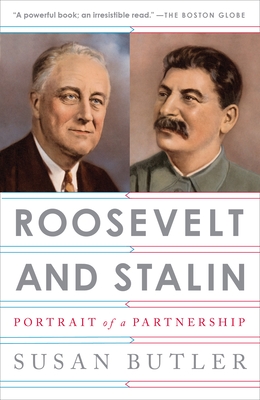 In Roosevelt and Stalin, Susan Butler tells the story of how the leader of the capitalist world and the leader of the Communist world became more than allies of convenience during World War II. They shared the same outlook for the postwar world, and formed an uneasy yet deep friendship, shaping the global  stage from the war to the decades leading up to and into the new century. The book makes clear that Roosevelt worked hard to win Stalin over, by always holding out the promise that Roosevelt’s own ideas were the best hope for the future peace and security of Russia. Stalin, however, was initially unconvinced that Roosevelt’s planned world organization, even with police powers, would be strong enough to keep Germany from starting a new war. In the end we see how Stalin’s opinion of Roosevelt evolved and how he began to view FDR as the key to peace.  Roosevelt and Stalin is a revelatory portrait of this crucial, geopolitical partnership.

Susan Butler was a freelance writer whose work regularly appeared in the New York Times. Her interest in journalism dates back to  Bennington where she was the editor of the student newspaper. She later earned an MA at Columbia University from the School of Arts and Sciences.

She is the author of East to the Dawn: The Life of Amelia Earhart, which was the basis for the movie Amelia, starring Hilary Swank and Richard Gere, and My Dear Mr. Stalin: The Complete Correspondence of Franklin Roosevelt and Joseph Stalin.

“More exciting than a million calls to order . . . Susan Butler is the perfect historian to explore the connections between the two men.” —Randy Dotinga, Christian Science Monitor

“An ambitious new portrait of the partnership that saved the world from Nazi tyranny. . . . A powerful book; an irresistible read.” —David M. Shribman, Boston Globe

“A rigorous study of one of the 20th century’s unlikeliest alliances. Throughout her excellent book, Butler shows how the leaders of the capitalist and communist worlds had not a grudging marriage of convenience but a willing friendship, one founded on and motivated by a shared vision: to defeat Hitler and create a lasting postwar peace. . . . Her attention to detail . . . keeps us gripped. . . . The result is a rewarding read about a meeting of disparate minds.” —Malcolm Forbes, Star Tribune

“Franklin Roosevelt’s relationship with Joseph Stalin has been well plumbed by historians, but Butler brings intimacy and texture to the topic . . . few will deny the pleasure her book provides.” —Robert Legvold, Foreign Affairs

“Butler effectively demonstrates that there was no greater mediator and champion of peace than Roosevelt, whose sudden death in the final months WWII robbed the world of perhaps the man who could have averted the Cold War.” —Publishers Weekly

“The most detailed account available of the relationship between these two extraordinary men. . . . [Susan Butler’s book] answers the question, as definitively as counterfactuals can be answered, of just how much of a difference Roosevelt’s death made. . . . An essential recounting of how the initial alliance between Stalin and FDR and its subsequent dissolution under Truman shaped the post-war world and our own.” —Marilyn B. Young, author of The Vietnam Wars 1945–1990


“Susan Butler’s brilliantly readable book firmly places FDR where he belongs, as the American president engaged most directly in diplomacy and strategy, who not only had an ambitious plan for the postwar world, but had the strength, ambition and personal charm to overcome Churchill’s reluctance and Stalin’s suspicion to bring about what was, in effect, an American peace, and to avoid the disastrous consequences that followed the botched peace of Versailles in 1919. It is at once a long overdue tribute to FDR and his vision, and a serious work of history that reads like a novel. I would rank it next to Margaret MacMillan’s Paris 1919, and casts new light on the character and war aims of Stalin, Churchill and FDR himself. Brava!” —Michael Korda, author of Hero, Ike and Clouds of Glory


"Well-written, richly detailed, and well-considered.  A significant narrative of a historically critical relationship and possibly, a lost opportunity to head off the arms race and the Cold War." —Evan Thomas, author of Ike's Bluff: President Eisenhower's Secret Battle to Save the World

"The most complete study to date of FDR's relationship with Stalin." —Frank Costigliola, author of Roosevelt's Lost Alliances