Double Cross: The True Story of the D-Day Spies (Paperback) 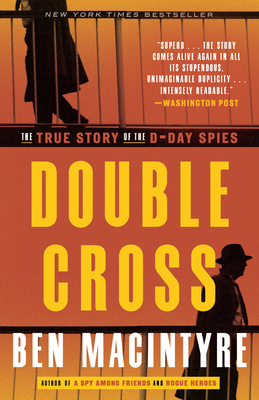 In Double Cross, New York Times bestselling author Ben Macintyre returns with the untold story of one of the greatest deceptions of World War II, and of the extraordinary spies who achieved it.

On June 6, 1944, 150,000 Allied troops landed on the beaches of Normandy and suffered an astonishingly low rate of casualties. D-Day was a stunning military accomplishment, but it was also a masterpiece of trickery. Operation Fortitude, which protected and enabled the invasion, and the Double Cross system, which specialized in turning German spies into double agents, deceived the Nazis into believing that the Allies would attack at Calais and Norway rather than Normandy. It was the most sophisticated and successful deception operation ever carried out, ensuring Allied victory at the most pivotal point in the war.

This epic event has never before been told from the perspective of the key individuals in the Double Cross system, until now. These include its director (a brilliant, urbane intelligence officer), a colorful assortment of MI5 handlers (as well as their counterparts in Nazi intelligence), and the five spies who formed Double Cross’s nucleus: a dashing  Serbian playboy, a Polish fighter-pilot, a bisexual Peruvian party girl, a deeply eccentric Spaniard, and a volatile Frenchwoman. The D-Day spies were, without question, one of the oddest military units ever assembled, and their success depended on the delicate, dubious relationship between spy and spymaster, both German and British. Their enterprise was saved from catastrophe by a shadowy sixth spy whose heroic sacrifice is revealed here for the first time.

With the same depth of research, eye for the absurd and masterful storytelling that have made Ben Macintyre an international bestseller, Double Cross is a captivating narrative of the spies who wove a web so intricate it ensnared Hitler’s army and carried thousands of D-Day troops across the Channel in safety.

BEN MACINTYRE is a writer-at-large for The Times of London and the bestselling author of A Spy Among Friends, Double Cross, Operation Mincemeat, and Agent Zigzag, among other books. Macintyre has also written and presented BBC documentaries of his work.

“Gripping stories from the perspective of a remarkable ragtag group of spies who tricked the Nazis in an astounding D-Day deception.  Puts other spy tales to shame.” —People

“It should be said loud and clear that Macintyre is a supremely gifted storyteller. He spins quite a yarn. His books are absurdly entertaining. I would kill for his keen wit. He takes us into a world of bounders, spivs, roués, and men (and women) on the make….Double Cross is a blast.”
—Boston Globe

“Forget fiction when you are buying beach reading this summer. Ben Macintyre’s factual account is more gripping than what you will find anywhere else. It is a story unsurpassed in the long history of intelligence.”
—Washington Times

“Macintyre at once exalts and subverts the myths of spycraft, and has a keen eye for absurdity.”
—New Yorker

“[A] complex, absorbing final installment in his trilogy about World War II espionage….Macintyre is a master storyteller.  Employing a wry wit and a keen eye for detail, he delivers an ultimately winning tale fraught with European intrigue and subtle wartime heroics.”
—San Francisco Chronicle

“A wonderfully entertaining story of deception and trickery that is told with verve and wit….Macintyre’s early books about espionage in World War II have been bestsellers, and this will be no exception.”
—Christian Science Monitor

“Macintyre revels in the surreal aspects of his story, writing with a breezy, almost tongue-in-cheek style. But the author is also adept at communicating the seriousness and the stakes of the underlying game….Nail-biting and chuckle-inducing reading.”
—Columbus Dispatch

“Another captivating, improbably fresh story of World War II….Double Cross is ennobling, invigorating and, above all, entertaining. Macintyre's research is impressive, as is his ability to shape disparate facts into a breathless page-turner….Throw in nail-biting suspense and the occasional decadent Nazi (fickle mistress optional) and, with Macintyre in charge, you're virtually guaranteed a history book that reads like a spy novel.”
—Richmond Times-Dispatch

“It is the riveting tales of these agents on which Ben Macintyre focuses, to full advantage, in Double Cross….Macintyre makes good use of the material. He knows how to let the high drama unfold on its own.”
—Wall Street Journal

“A tale of smarts, personal courage and — even knowing what happened on June 6, 1944 — suspense.  Where would we be if these troubled, eccentric and hang-it-all characters hadn't known how to lie, and lie well?”
—Seattle Times

“As in his earlier best-sellers about WWII-era spycraft, Agent Zigzag and Operation Mincemeat, Macintyre writes with novelistic flair.”
—Entertainment Weekly

“The story of D-Day – when 150,000 Allied troops landed on the beaches of Normandy – as it’s never been told before….this amazing story shows how double agents and spies tricked the German army and saved thousands of Allied lives.”
—New York Post

“Only with author Ben Macintyre’s scintillating account has this complex human drama, with all its tortuous twists and turns, finally received the cinematic treatment it deserves….This is edge-of-the seat stuff.”
—WWII Magazine

“Macintyre does a fine job depicting this extraordinary cast and exposing the ambiguous world of espionage....compelling.”
—MHQ: The Quarterly Journal of Military History

“With the same skill and suspense he displayed in Operation Mincemeat and Agent Zigzag….Macintyre effortlessly weaves the agents’ deliciously eccentric personalities with larger wartime events to shape a tale that reads like a top-notch spy thriller.”
—Publishers Weekly (starred)

“With his latest book, Double Cross, Ben Macintyre tells the astonishing true story of a bizarre group of misfit spies who played a critical role in the success of D-Day.  The stories in this book, many of which have never before been told, are nothing short of incredible.  Skillfully woven together, they form one of the most gripping narratives I have ever read.”
—Candice Millard, author of The River of Doubt and Destiny of the Republic

“Ben Macintyre and I work in the same period, and I should be reading him because he is such a scrupulous and insightful writer – a master historian. But, with Double Cross and his other excellent works, I always wind up reading him for pleasure.  Double Cross may be his best yet, falling somewhere between top-class entertainment and pure addiction.”
—Alan Furst, author of A Mission to Paris

"Ben Macintyre’s spellbinding account features an improbable cast of characters who pulled off a counter-intelligence feat that was breathtaking in its audacity. Their deceptions within deceptions—known as the Double Cross—were critical to the success of the D-Day invasion, and continued to mislead the Germans long after Allied troops landed on the beaches of Normandy. A truly bravura performance, as is Macintyre’s fast-paced tale."
—Andrew Nagorski, author of Hitlerland: American Eyewitnesses to the Nazi Rise to Power

"How on earth, in 1944, did we dupe Berlin that we would attack the coast of France in completely the wrong place?  It was a deception that saved tens of thousands of Allied lives.  In Double Cross, Ben Macintyre ingeniously explains exactly how it was done."
—Frederick Forsyth

"Never before revealed facts about the workings of the Intelligence Service in the build up to D-Day in the Second World War.  Ben Macintyre's remarkable book is a gripping revelation."
—Jack Higgins

“[Macintyre] has excelled himself with a cast of extraordinary characters and in his storytelling abilities....Double Cross is an utterly gripping story.”
—Antony Beevor, The Telegraph

“Enthralling....Macintyre is a master at leading the reader down some very tortuous paths while ensuring they never lose their bearings. He’s terrific, too, at animating his characters with the most succinct of touches....gripping.”
—London Evening Standard