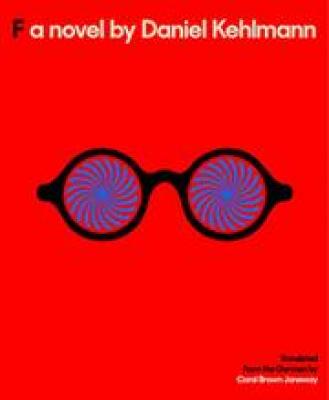 "I loved this novel. This has been one of my top summer reads. Philosophical, funny and absorbing, this story of three brothers (an artist, a priest and a stockbroker) groping through adulthood in the long shadow of their unpredictable father (a bestselling author), reminded me that my favorite novels are the ones that make me think beyond the story, that challenge my presumptions about the characters, and that just make me laugh. And then they gave it an awesome cover!"

"F is for family. F is for fortune. F is for fraud. F is for fate."
From the internationally acclaimed author of "Measuring the World, " here is a dazzling tragicomedy about three brothers whose father takes on the occult and both wins and loses.
Arthur is a dilettante, a wannabe writer who decides to fill an afternoon by taking his three young sons to a performance by the Great Lindemann, Master of Hypnosis. While allowing one of them to be called onto the stage and made a spectacle of, Arthur declares himself to be immune to hypnosis and a disbeliever in all magic. But the Great Lindemann knows better. He gets Arthur to tell him his deepest secrets and then tells him to make them real. That night, Arthur empties the family bank account, takes his passport, and vanishes. He's going to become a world-famous author, a master of the mystical. (F is for fake.)
But what of the boys? Martin, painfully shy, grows up to be a Catholic priest without a vocation. (F is for faith, and lack of it.) Eric becomes a financier (F is for fraud), losing touch with reality as he faces ruin, while Ivan, destined for glory as a painter, instead becomes a forger. (F is for forgery, too.) They ve settled into their life choices, but when the summer of the global financial crisis dawns they re thrown together again with cataclysmic results.
Wildly funny, heartbreaking, tragic, Daniel Kehlmann's novel about truth, family, and the terrible power of fortune is a fictional triumph.

Daniel Kehlmann was born in Munich in 1975 and lives in Berlin and New York. His works have won the Candide Prize, the Doderer Prize, the Kleist Prize, the "Welt" Literature Prize, and the Thomas Mann Prize. "Measuring the World" was translated into more than forty languages and is one of the greatest successes in postwar German literature.