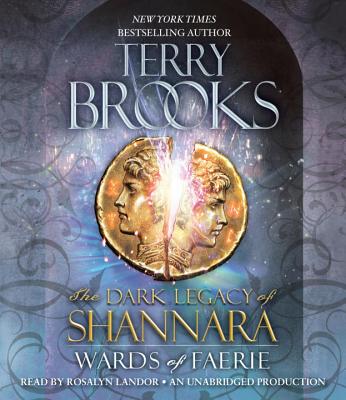 By Terry Brooks, Rosalyn Landor (Read by)
$45.00
Not available to order.

Seven years after the conclusion of the High Druid of Shannara trilogy, "New York Times" bestselling author Terry Brooks at last revisits one of the most popular eras in the legendary epic fantasy series that has spellbound readers for more than three decades.
When the world was young, and its name was Faerie, the power of magic ruled and the Elfstones warded the race of Elves and their lands, keeping evil at bay. But when an Elven girl fell hopelessly in love with a Darkling boy of the Void, he carried away more than her heart.
Thousands of years later, tumultuous times are upon the world now known as the Four Lands. Users of magic are in conflict with proponents of science. Elves have distanced their society from the other races. The dwindling Druid order and its teachings are threatened with extinction. A sinister politician has used treachery and murder to rise as prime minister of the mighty Federation. Meanwhile, poring through a long-forgotten diary, the young Druid Aphenglow Elessedil has stumbled upon the secret account of an Elven girl's heartbreak and the shocking truth about the vanished Elfstones. But never has a little knowledge been so very dangerous as Aphenglow quickly learns when she's set upon by assassins.
Yet there can be no turning back from the road to which fate has steered her. For whoever captures the Elfstones and their untold powers will surely hold the advantage in the devastating clash to come. But Aphenglow and her allies Druids, Elves, and humans alike remember the monstrous history of the Demon War, and they know that the Four Lands will never survive another reign of darkness. But whether they themselves can survive the attempt to stem that tide is another question entirely.
Terry Brooks is] the most important fantasy writer since J.R.R. Tolkien. "Rocky Mountain News.

Terry Brooks is the "New York Times" bestselling author of more than thirty books, including the Dark Legacy of Shannara adventure" Wards of Faerie;" the Legends of Shannara novels "Bearers of the Black Staff" and "The Measure of the Magic; "the Genesis of Shannara trilogy: "Armageddon s Children, The Elves of Cintra, "and" The Gypsy Morph; The Sword of Shannara;" the Voyage of the" "Jerle Shannara trilogy: "Ilse Witch, Antrax, "and" Morgawr;" the High Druid of Shannara trilogy: "Jarka Ruus, Tanequil, "and" Straken; "the nonfiction book "Sometimes the Magic Works: Lessons from a Writing Life; "and the novel based upon the screenplay and story by George Lucas, "Star Wars: (r) "Episode I "The Phantom Menace." His novels "Running with the Demon "and" A Knight of the Word" were selected by the "Rocky Mountain News" as two of the best science fiction/fantasy novels of the twentieth century. The author was a practicing attorney for many years but now writes full-time. He lives with his wife, Judine, in the Pacific Northwest."