A Passion for Leadership: Lessons on Change and Reform from Fifty Years of Public Service (Paperback) 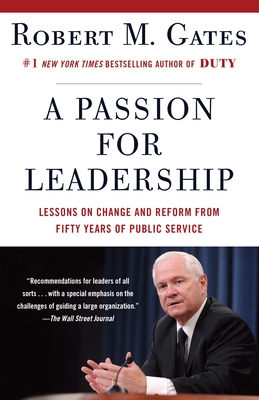 Having led change successfully at three sprawling, monumental organizations—the CIA, Texas A&M University, and the Department of Defense—Robert M. Gates offers the ultimate insider's look at how leaders can transform large organizations and companies. For many Americans, bureaucracy and corporate structure are code words for inertia. Gates knows that it doesn't have to be that way. With stunning clarity, he shares how simple plans, faithfully executed, can cut through the mire of bureaucracy to reform organizational culture. And he shows that great leaders listen and respond to their teams and embrace the power of compromise. Using the full weight of his wisdom, candor, and devotion to duty, he empowers leaders at any level to effectively implement his leadership strategies.

ROBERT M. GATES served as secretary of defense under both President George W. Bush and President Barack Obama. He was also an officer in the United States Air Force and worked for the CIA before being appointed director of the agency. He served eight presidents of both political parties and was a member of the National Security Council staff in four administrations. He was president of Texas A&M University from 2002 to 2006, is currently chancellor of the College of William & Mary, was named president of the Boy Scouts of America in 2013, and has served on several corporate boards of directors.

"Full of strong advice for good leadership. . . . Provides interesting insight into Gates's understanding of the impressive leadership positions he has held." —The Huffington Post

"A guide to leading large institutions through reform and change. . . . [Gates] brings [his suggestions] to life through stories of his own powerful and critical leadership roles." —The Washington Post, Nine Leadership Books to Watch for in 2016